For Immediate Release
Office of the Press Secretary
March 31, 2006

The Security and Prosperity Partnership of North America: Next Steps 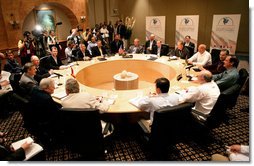 The North American Competitiveness Council. Increasing private sector engagement in the SPP by adding high-level business input will assist governments in enhancing North America's competitive position and engage the private sector as partners in finding solutions. The Council will:

Advancing Cooperation on Avian and Pandemic Influenza. Leaders agreed to the following principles to guide collaboration on all stages of avian or pandemic influenza management:

North American Energy Security Initiative. A secure and sustainable energy supply is essential for our economic prosperity in North America. To advance our energy agenda we have agreed to:

North American Emergency Management. The commitments made in the SPP recognize that a disaster - whether natural or man-made - in one North American country can have consequences across national borders, and may demand a common approach to all aspects of emergency management. Recent experience with hurricanes, ice storms, industrial accidents and the like demonstrate our interdependencies, as well as the need for coordination and mutual assistance in protecting and safekeeping our populations. Moving forward we will:

Smart, Secure Borders. Leaders agreed to complete the following activities, to contribute to smart and secure borders, over the next twenty-four months:

The Security and Prosperity Partnership of North America (SPP), launched by the leaders of Mexico, Canada and the United States in March 2005, aims to promote growth and economic opportunity, increase security, and improve the quality of life of our peoples. In June 2005, lead Ministers issued a joint report outlining steps to achieve these goals. Since then, highlights of accomplishments include: