For Immediate Release
Office of the Press Secretary
March 28, 2006

THE PRESIDENT: Earlier this month, Andy Card came to me and raised the possibility of stepping down as Chief of Staff. After five-and-a-half years, he thought it might be time to return to private life, and this past weekend I accepted Andy's resignation.

Andy Card has served me and our country in historic times: on a terrible day when America was attacked, during economic recession and recovery, through storms of unprecedented destructive power, in peace and in war. Andy has overseen legislative achievements on issues from education to Medicare. He helped confirm two justices to the Supreme Court, including a new Chief Justice. 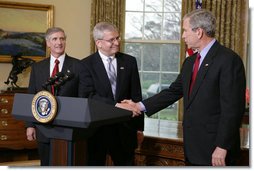 In all these challenges and accomplishments, I have relied on Andy's wise counsel, his calm in crisis, his absolute integrity, and his tireless commitment to public service. Andy is respected by his colleagues for his humility, his decency and his thoughtfulness. They have looked to him as a leader and a role model and they, like me, will miss him.

On most days, Andy is the first one to arrive in the West Wing and among the last to leave. And during those long days over many years I've come to know Andy more than my Chief of Staff. He is leaving the White House, but he will always be my friend. Laura and I have known Andy and his wife, Kathi, for more than 20 years, and our close friendship will continue.

With me today is Joshua Bolten, who will be the new White House Chief of Staff. Josh is a man with broad experience, having worked on Capitol Hill and Wall Street and the White House staff, and for nearly three years as a Director of the Office of Management and Budget. Josh is a creative policy thinker. He's an expert on the budget and our economy. He's respected by members of Congress from both parties; he's a strong advocate for effective accountable management in the federal government.

He's a man of candor and humor and directness, who's comfortable with responsibility and knows how to lead. No person is better prepared for this important position, and I'm honored that Josh has agreed to serve.

The next three years will demand much of those who serve our country. We have a global war to fight and win. We have great opportunities to expand the prosperity and compassion of America. We've come far as a nation, yet there's a lot on the road ahead. I'm honored to have served with Andrew Card. I've got great confidence in my next Chief of Staff.

DIRECTOR BOLTEN: Mr. President, thank you for those kind words and for your confidence. It's been the privilege of a lifetime to serve in your Cabinet as head of a great organization, the Office of Management and Budget. I'm deeply honored now by the opportunity to succeed Andy Card as White House Chief of Staff. 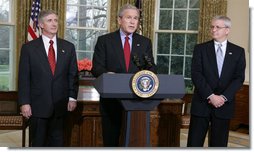 I say "succeed" Andy Card, and not replace him, because Andy cannot be replaced. His hallmarks of honesty had decency, dedication and courage, have made him not only a great leader of your White House staff, Mr. President, but they've also placed him among the finest public servants of this generation.

Mr. President, the agenda ahead is exciting. You've set a clear course to protect our people at home, to promote freedom abroad, and to expand our prosperity. I'm grateful for Andy's willingness to stay on for a couple of weeks to help break me in, and then I'm anxious to get to work.

Thank you again, Mr. President, for the privilege of serving you and our nation.

SECRETARY CARD: Mr. President, Ecclesiastes reminds us that there are different seasons, and there is a new season. Working in the White House is a tremendous privilege. It's almost beyond description, the great privilege it is to work at the White House. But it is even a greater honor to serve as the President's Chief of Staff, especially to you, Mr. President.

I have watched as you have kept your oath to preserve, protect and defend our Constitution, and I know that there are a lot of people who help you do that, and it starts with the White House staff, goes through everybody who serves in the executive branch of government, and most especially those young men and women who wear uniforms and help defend us.

I've watched your leadership guide them during troubled times. I'm watched you comfort Americans, rally the world to meet real needs. I've watched as you've guided us from a recession to economic recovery. But most of all, I've watched you as a person. And you're a good man, Mr. President, and you do great things.

But it is a different season, and Josh Bolten is the right person for that season. I'm excited about the leadership that he will bring to the White House staff and to all of your government, and I'm grateful to the Cabinet that has helped to serve you, as well.

Mr. President, as a Chief of Staff, I know I was a staffer, and now I look forward to being your friend. Thank you, Mr. President.