For Immediate Release
Office of the Press Secretary
March 28, 2006 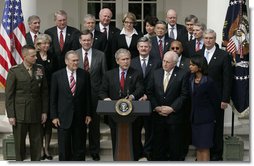 My Cabinet officials obviously have got many responsibilities in their agencies, but we talked about their need to assume additional responsibilities, to make sure that we're using every element of national power to win the war on terror and to secure the peace.

This morning we had briefings from General Abizaid, Ambassador Khalilzad, and General Casey. We heard from the Ambassador about work toward a -- work toward a unity government. I'm pleased to hear from Zal that the Iraqis are now back at the table discussing the formation of a government, the process by which they will conduct a government once a unity government is formed, as well as, obviously, beginning to continue to -- or continuing to discuss who will fill the key slots in the government.

I appreciate very much General Pace joining us today, as well. These leaders, folks on the ground who know the condition on the ground, recognize this is hard work, but they also report on steady progress that we're making toward meeting our important goals -- important goal is to make sure Iraq is a democracy that can sustain herself, defend herself, and is not a safe haven for the terrorists.

Tomorrow I'm going to deliver a third in a series of speeches about the situation in Iraq. During Saddam Hussein's brutal rule he exploited the ethnic and religious diversity of Iraq by setting communities against one another. And now the terrorists and former regime elements are doing the same -- they're trying to set off a civil war through acts of sectarian violence. But the United States and our Iraqi forces cannot be defeated militarily. The only thing the Iraqi insurgents, as well as the terrorists, can possibly do is to cause us to lose our nerve and retreat, to withdraw.

I'm going to discuss how the Iraqi people and our coalition continue to work together to build a stable and free and prosperous Iraq. I'll remind the people we're not going to lose our nerve. The stakes are high; we will complete this mission. Our strategy for rebuilding Iraq is comprehensive, and it includes a commitment from all parts of the federal government.

Secretary Rice encouraged our Cabinet members to build relationships with their counterparts in Iraq once the new Iraqi government is formed. And I expect them to follow through on that -- on their commitments. See, by making a broad commitment from the federal government, we'll help the Iraqis establish a democracy, we'll help them build the institutions necessary for a stable society, and we'll help defeat the terrorists. 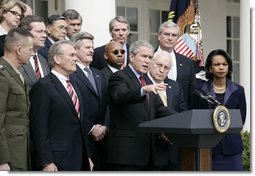 Today was the -- today two members of my Cabinet -- we had the honor -- a chance to honor two members of my Cabinet who won't be with us much longer: Secretary of the Interior Gale Norton, and Chief of Staff Andy Card. These two folks have served our country with distinction and honor. I am proud to work side-by-side with them, and I'm proud to call them friend. Thank you all very much.