For Immediate Release
Office of the Press Secretary
March 23, 2006

THE PRESIDENT: Thank you. Pleased be seated. (Applause.) Ambassador, good to see you. Please be seated. Welcome. Appreciate you all coming. In a few minutes I'm going to sign a bill that authorizes permanent normal trade relations between the United States and Ukraine. It's a good bill, and it's going to strengthen our ties with our friend, Ukraine. It's going to create new opportunities, economic opportunities, for both our countries. 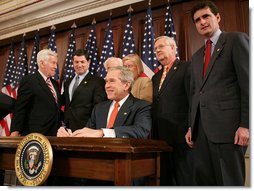 I welcome you all here. I especially welcome the Ambassador from Ukraine, Ambassador Shamshur. Welcome, Mr. Ambassador. Appreciate you coming. (Applause.) This is the third time we've been together in the last 30 days. (Laughter.) I'm better for it. (Laughter.)

The bill I sign today marks the beginning of a new era in our history with Ukraine. During the Cold War, Congress passed the Jackson-Vanik Amendment as a response to widespread communist deprivation of human rights. The law made American trade with communist nations contingent on those countries' respect for the rights of their own people. At the time, the law served an important purpose -- it helped to encourage freedom and the protection of fundamental rights, and penalized nations that denied liberty to their citizens. Times have changed. The Cold War is over, and a free Ukraine is a friend to America and an inspiration to those who love liberty.

The Orange Revolution was a powerful example of democracy for people around the world. The brave citizens who gathered in Kiev's Independence Square demanded the chance to determine their nation's future, and when they got that chance, they chose freedom. In the past two years, Ukraine has held free elections, and the people of Ukraine and its President, Viktor Yushchenko, are deeply committed to democratic reform. On Sunday, the Ukrainian people will again have the chance to cast a ballot in parliamentary elections, and they have a chance to continue to shape their own future. 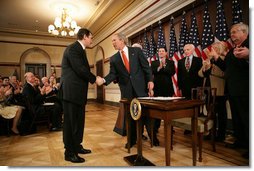 Ukraine is also working to expand its market economy and produce measurable improvements in the lives of the Ukranian people. America supports these efforts, and this bill is an important step. By eliminating barriers to trade between the United States and Ukraine, the bill will help Ukraine grow in prosperity. As we've seen over the past 50 years, trade has the power to create new wealth for whole nations and new opportunities for people around the world. By expanding trade with Ukraine, this bill will open new markets for American products and help Ukrainians continue to build a free economy that will raise the standard of living for families across their land.

As Ukraine embraces democracy and more open trade, our nation's friendship will grow. President Yushchenko has made reforms to increase transparency and provide intellectual property protection and strengthen the enforcement of the rule of law.

These reforms have taken great conviction. And earlier this month, our two nations signed a bilateral agreement that will establish the terms of trade between our nations when Ukraine joins the World Trade Organization. We support Ukraine's goal of joining the WTO, and we will help resolve the remaining steps required for entry as quickly as possible. As the Ukrainian government continues to build on a record of progress at home, we will help Ukraine joins the institutions that unite free nations and become a part of Europe that is whole, free, and at peace.

The United States is proud to call Ukraine a friend, and I'm honored to sign this important piece of legislation into law. (Applause.)