For Immediate Release
Office of the First Lady
March 21, 2006

The seeds of MOVING IN THE SPIRIT (MITS) were sown in 1986 in an Atlanta housing project by a pair of volunteers who believe in the inherently positive spirit of young people. The primary goal of Moving in the Spirit is to create transformation, possibility and promise. Through dance, students are taught responsibility, respect, accountability, commitment and discipline. 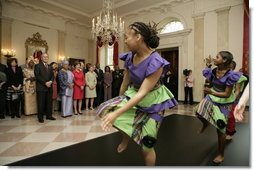 The hopeful vision of two young women has blossomed into a program that annually serves more than 200 young people ages 3-18 throughout Atlanta. MITS works predominantly with minority students from underserved neighborhoods. The program allows participants to advance step by step, offering classes of increasing frequency and intensity. Each level of training is suited to the individual child's intellectual and technical growth. Every year the program presents performances both locally and nationally to audiences numbering in the thousands.

The MITS mentoring component fosters personal development by paring each child with a volunteer adult mentor who helps to address academic needs, promote positive life skills and provide expanded recreational and cultural activities. MITS helps create successful young adults by training them to be community leaders, as well as dancers. The program taps into the students' creative spirit, inspiring and motivating them to achieve any goals they can imagine.

DENYCE GRAVES, one of today's most sought-after vocal stars, has a repertoire that includes opera, German Lieder, French m lodie, and English art songs, as well as Broadway favorites, jazz and spirituals. Ms. Graves is a native of Washington, D.C., where she attended the Duke Ellington School for the Performing Arts. She continued her education at Oberlin College Conservatory of Music and the New England Conservatory.

Her performances this season include a tour throughout the U.S. with Andrea Bocelli; a special appearance at the 50th anniversary gala of The Washington Opera; and singing the title role in a new American opera, Margaret Garner, which is based on the novel Beloved by Toni Morrison. Ms. Morrison also wrote the opera's libretto.

In response to the events of September 11, 2001, Ms. Graves gave a series of benefit concerts, recorded a benefit album of patriotic songs, and was asked by President Bush to sing in the National Prayer Service in Washington's National Cathedral. She recently sang for President and Mrs. Bush, among other dignitaries, at An American Celebration at Ford's Theatre, a salute to American troops.

In 2003 Denyce Graves was appointed as a Cultural Ambassador for the United States, and she now travels around the world under the auspices of the State Department, appearing in good-will missions of musical performances, lectures, and seminars. Ms. Graves has been the recipient of many awards, including the Grand Prix du Concours International de Chant de Paris and the Marian Anderson award, presented to her by Miss Anderson. 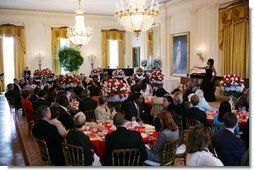 THOMAS REILLY is an acclaimed vocal coach and pianist who has been involved in the music preparation of over 60 opera productions during his career. In the Washington area, his work has included assignments as an Assistant Conductor and Chorus Master with the Washington Opera, Wolf Trap Opera, and Summer Opera Theater.

He served as the principal coach and pianist for the opera workshop at the Brevard Music Center in Brevard, North Carolina for several summers. In Caracas, Venezuela, he served on the faculty of the Caracas Opera Center as a vocal coach and chorus master and was a member of the musical staffs of both the Opera Metropolitana and the Opera de Caracas. He is a former faculty member of the Rome School of Music at the Catholic University of America and is currently on the faculty of the Amalfi Coast Music Festival.

On the recital stage, Mr. Reilly has accompanied countless singers in Washington venues including the Kennedy Center Concert Hall, the Phillips Gallery, and the National Gallery of Art.