For Immediate Release
Office of the Press Secretary
March 20, 2006

Mr. Secretary General, thanks for coming. We've just had a wide-ranging discussion on a variety of issues, which is what you'd expect when allies and friends come together. We discussed Iraq, and I want to thank NATO for its involvement in helping train Iraqi security forces so they can end up protecting the Iraqi people from the -- from those who want to kill innocent life in order to affect the outcome of that democracy. 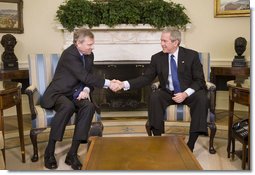 I want to thank you very much for your strong involvement in Afghanistan. A NATO presence in Afghanistan is really important. I learned that firsthand when I went to Afghanistan and talked to President Karzai and his government. They were very supportive of the mission -- and thankful for the mission. NATO was effective, and that's one of the things that really important for our citizens to understand, that our relationship with NATO is an important part of helping us to win the war on terror.

We also talked about Darfur and the Sudan. I'd called the Secretary General earlier this year. I talked to him about a strategy that would enable NATO to take the lead in Darfur. However, some things have to happen prior to that happening, and the first thing is that the African Union must request from the United Nations a U.N. mission to convert the AU mission to a U.N. mission, at which point that's done, the -- NATO can move in with United States help within -- inside of NATO -- to make it clear to the Sudanese government that we're intent upon providing security for the people there, and intent upon helping work toward a lasting peace agreement.

So thanks for coming. Looking forward to the meeting later on this year, big NATO summit. And I'm convinced that, like the last summit we had, you'll lead that meeting with the efficiency and professionalism that you're known for.

SECRETARY GENERAL DE HOOP SCHEFFER: Thank you very much, Mr. President. Let me echo what the President has been saying about NATO delivering, about NATO making the difference. In Afghanistan the fight against terror is an extremely important element there. NATO indeed assists in the African Union in Darfur, and I'm quite sure, as I've told the President, that when the U.N. comes, the NATO allies will be ready to do more in enabling the United Nations force in Darfur.

NATO assisted after Hurricane Katrina. NATO had a major humanitarian operation in Pakistan. NATO is in the Balkans. All 26 NATO allies participate in one way or the other in the training mission in Iraq. Now I want to see NATO-trained Iraqi officers taking their responsibility in fighting the terrorists in their own country.

In other words, NATO is delivering. And in the run-up to the NATO summit in Riga at the end of the year, as the President mentioned, we'll make sure -- NATO will make sure that this will be an important event.

In NATO's outreach, as he mentioned -- the Middle East, North Africa, Israel, Jordan, the nations of the Gulf -- NATO's contacts with other nations who share our values -- we have Australia, Japan, South Korea -- in other words, we'll see to it that the military agenda of NATO and the political agenda of NATO will be very seriously addressed in Riga. And I'm very glad for the support, the permanent support, and the friendship of our most important ally, the United States, and its leader, President Bush.