For Immediate Release
Office of the Press Secretary
March 17, 2006

PRIME MINISTER AHERN: Mr. President, Ambassadors, and friends; President, thank you for your warm welcome once again to the White House this morning to celebrate -- celebrate St. Patrick's Day, to me and all of the Irish delegation. And we're enormously honored to be here with you today. It means a great deal to us, and we deeply appreciate your time, both yesterday and again today. 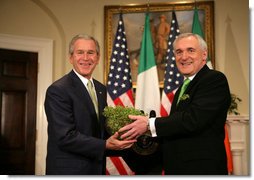 Ireland and the United States are two countries of vastly different size and scale, but we enjoy an extraordinary and very special relationship. There's a profound bond between us that is historic and indelible. And it is fitting that we stand side-by-side in this great house to celebrate St. Patrick and Ireland together.

This Shamrock Ceremony is a cherished tradition. It symbolizes the profound kinship between Ireland and the United States. And the history of Irish immigration to this country is as old as America, itself. This week, across this great land, millions of Irish Americans are proudly celebrating their heritage. Remember on this day that the strength of today's relationship is made possible by the hard sacrifices of generations of Irish immigrants. From a sad and difficult past has emerged a successful and a proud people -- proud of Ireland, proud of the United States, and proud of being Irish American. We salute their many achievements, and we celebrate their many successes.

Mr. President, you have shown real leadership and understanding in the complex challenge of comprehensive immigration reform. On this St. Patrick's Day, mindful of the resonance that this great issue commands for people, and Irish people, I would like to express the hope that a path may be found to enable current Irish immigrants to legalize their status in the United States on a permanent basis. I hope that they can realize their dream of stable and secure lives for themselves and their families in this great country.

Mr. President, the greatest historic issue that has faced the Irish people from all traditions and creeds has been the challenge to live together in peace on our small island. Since we met last year, we've made further real progress. After decades of denying the will of the Irish people, the IRA announced the end of its armed campaign and the decommissioning of its weapons. These were long-awaited, landmark, historic developments.

Both Prime Minister Blair and I are determined that 2006 will be a decisive year in completing the journey of peace that we've embarked on. We're at one in our objective and in our strategy. We want to see the Good Friday Agreement implemented, and its full potential realized. We will not be deterred from this challenge. And when we look back on such a dark past, we're all the more determined to delivering the promise and hope of that indispensable agreement. The path to a permanent peace has not been easy. But I believe that, step by step, we are steadily building that peace and setting Northern Ireland on course for the future.

The United States has been a great friend in this quest, and as we seek to conclude the last elements in our peace process, your continuing support, Mr. President, will be of enormous importance and greatly appreciated. I welcome your invitation to the Northern Ireland political parties to be here today, and the fact that you've also extended an invitation to many others tragically affected by violence, or working for a better future for everyone in Ireland.

I warmly applaud the work of your Special Envoy, Ambassador Mitchell Reiss, as well as Ambassador James Kenny. They do a great job serving their country. And their tireless efforts and commitment in advancing the peace process in Ireland are widely recognized.

President John Quincy Adams once said that patience and perseverance have a magical effect before which difficulties disappear and obstacles vanish. We have found, Mr. President, the patience and perseverance that produce great results. With a little more on everybody's part, and with your help, and that of all our friends in the United States, we will complete our historic journey.

I'm very pleased, President, to present you once again on this St. Patrick's Day of 2006, the shamrock as a token of our esteem and the warmth of our friendship.

(The shamrock is presented.) (Applause.)

PRESIDENT BUSH: Taoiseach, thank you very much. Welcome back.

PRESIDENT BUSH: Laura and I are delighted to welcome you here to the White House. I'm proud to accept the bowl of shamrocks as a symbol of our friendship.

The friendship between Ireland and the United States has deep roots. Few people fought as hard for American independence as the sons of Erin. At the end of the Revolutionary War, Lord Mountjoy told the House of Commons that, "We've lost America through the Irish." The Irish played a key role in Washington's army. And in the two centuries since, the ties between Ireland and America have only strengthened.

The ties between Ireland and America are reflected in this great house. This house was designed by an Irish architect, and he used as his model the grandest building he knew, Leinster House in Ireland. The affinities between the two buildings are more than just architectural; the White House built by James Hoban has been home to every American President since John Q. Adams' father, John. The Dublin building that inspired him now serves as a free parliament in a free and independent Ireland.

The ties between Ireland and America are also reflected in our people. Ireland has one of the fastest growing economies in Europe, and its growth is attracting immigrants. For more than a century that was a different story. Millions of Irish came to our shores because of war and poverty and famine. Often they arrived with nothing but the faith of their fathers, and a willingness to work. These men and women who built our cities were also the soldiers who defended our freedom in every one of our wars. They're the priests and they're the nuns who built a system of parochial schools that provided a decent education for millions of poor immigrants. And they're now doing the same thing for a new generation of African Americans and Latino Americans in our inner cities.

Like St. Patrick, the Irish in America began their life in their new land as exiles, but came to love it as home. Finally, the ties between Ireland and America are reflected in our common commitment to bring the blessings of liberty to every man and woman and child on this Earth.

In the 20th century, Ireland won its independence and raised up a democracy that offered its people a just and better life. In the 21st century, Ireland is now helping other nations who share the same aspirations for peace and prosperity by fighting hunger, and the spread of HIV/AIDS in Africa, by supporting relief efforts for victims of the tsunami in Asia, and by helping the Afghan people rebuild their lives and their country. Ireland is independent when it comes to foreign policy. But Ireland is not neutral when it comes to the global challenges like hunger and disease and human rights.

Taoiseach, you're making a big contribution to our world, and we appreciate it. The United States appreciates all of Ireland's efforts for peace and freedom. Americans are grateful to our Irish friends, and we are proud of our Irish heritage.

The Census Bureau tells us there are more than 34 million Americans that claim Irish ancestry. On St. Patrick's Day, I suspect that number jumps a little bit. (Laughter.) On this special day, we honor the saint who brought the gospel of peace to the Green Isle, and we count ourselves blessed by the warm friendship between his adopted land and our own.

Thanks for coming. Appreciate it. (Applause.)