For Immediate Release
Office of the Press Secretary
March 16, 2006

THE PRESIDENT: Thank you. Welcome. Thanks for coming. In a few moments, I will sign a bill that protects the hard work of American innovators, strengthens the rule of law, and helps keep our families and consumers safe. The Stop Counterfeiting in Manufactured Goods Act has earned broad support. And I want to thank all those who helped get this bill passed for being here today. I want to thank the lawmakers from both political parties for getting this piece of legislation to this desk. I want to thank the consumer protection groups who have joined us, as well. Thanks for your hard work on this important piece of legislation. 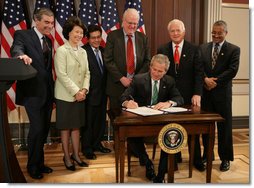 I want to thank the Attorney General, Al Gonzales, who has joined us; the Secretary of Commerce, Carlos Gutierrez; my Secretary of Labor, Elaine Chao. Thank you all for being here. I appreciate the Chairman of the Judiciary -- House Judiciary, Jim Sensenbrenner, for joining us today. I also want to thank the bill's sponsor, Joe Knollenberg from Michigan, as well as Bobby Scott from Virginia. Thank you three members for being here. The senators claim they're voting on important legislation, otherwise they would have been here, too. (Laughter.)

This economy of ours is strong, it's getting stronger. We grew at 3.5 percent last year, the national unemployment is 4.8 percent. People are buying homes, the small business sector is strong, productivity is up. Our country is productive, it's innovative, it's entrepreneurial, and we've got to keep it that way.

One of the problems we have is that people feel comfortable, at times, in trying to take a shortcut to success in the business world. They feel like they can copy existing products, instead of designing their own. In order to keep this economy innovative and entrepreneurial, it's important for us to enforce law, and if the laws are weak, pass new laws, to make sure that the problem of counterfeiting, which has been growing rapidly, is arrested, is held in check.

This administration and Congress have worked together to confront the illegal threat, the real threat of illegal activity such as counterfeiting. And the bill I'm signing today is an important step forward.

The bill helps us defeat counterfeiting in two key ways. First, the bill strengthens our laws against trading counterfeit labels and packaging. In the past, the law prohibited the manufacturing, shipping, and -- or selling of counterfeit goods, but it did not make it a crime to ship falsified labels or packaging, which counterfeits could then attach to fake products.

This loophole helped counterfeiters cheat consumers by passing off poorly-made items as brand-name goods. By closing the loophole, we're going to keep honest Americans from losing business to scam artists.

The tools in the bill I sign today will become a part of our broad effort to protect the creativity and innovation of our entrepreneurs. This administration is leading an initiative called STOP -- Strategy Targeting Organized Piracy. Nine federal agencies are coming together in this initiative, including the Department of Justice, which has launched the most aggressive effort in American history to prevent intellectual property violations. We've expanded computer hacking and intellectual property units in U.S. Attorney's offices all across the country. We're posting specially trained prosecutors and FBI agents at American embassies in Asia and Eastern Europe. We're working with other nations and the World Trade Organization to promote strong intellectual property laws around the globe. We're cooperating with the private sector to raise awareness of counterfeiting so we can help stop fraud before it starts.

These efforts are getting some results. Last year, we dismantled a piracy ring in Massachusetts that was planning to sell more than 30,000 counterfeit hand bags and shoes and necklaces and other items.

With partners overseas, we broke up a prescription drug counterfeiting network, and seized more than $4 million in phony medicine. With the help of 16 countries on five continents, we removed more than $100 million of illegal online software, games, movies and music. This is a really important effort, and as we call upon folks to send a message to the counterfeiters, we're not going to tolerate your way of life, that we need to give them all the tools necessary to do their jobs. And this bill I'm going to sign here in 30 seconds does just that.

Again, I want to thank you all for being here to help honor these legislators that crossed the partisan divide to help protect this country from those who feel like they can sell illegal products and counterfeit and steal our -- steal intellectual property. Good work. Thanks for coming. Now let's sign the bill. (Applause.)