For Immediate Release
Office of the Press Secretary
March 16, 2006

THE PRESIDENT: Good afternoon. I'm pleased to announce my nomination of Governor Dirk Kempthorne to be the Secretary of the Interior. The Department of Interior is responsible for managing our national parks and public lands, conserving our natural resources, and pursuing environmentally responsible energy development on federal lands and waters. 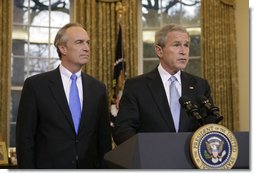 I've nominated Dirk to succeed an outstanding public servant, Gale Norton. As the Secretary of the Interior for the past five years, she was instrumental in establishing the Healthy Forests Initiative, to protect communities from catastrophic wildfire, and to improve the habitat. When Hurricane Katrina devastated the Gulf Coast region, she helped lead the efforts to restore offshore energy production, so that Americans would not suffer further supply disruptions and price increases.

Future generations of Americans will be able to enjoy our great national parks and wildlife refugees because of Gale's untiring work. Gale was one of the original members of my Cabinet, and the first woman in American history to hold the post of Secretary of the Interior. I appreciate her dedicated service, and Laura and I wish Gale and John all the best.

Dirk Kempthorne is the right man to build on this progress. As Governor of Idaho, he worked closely with Gale on a variety of important initiatives. They worked together to resolve a longstanding water rights issue, to return responsibility to Idaho for managing the local wolf population, and to make the Healthy Forests Initiative a reality in Idaho.

As Governor, Dirk has been a responsible steward of Idaho's 30 state parks and recreational trail ways that serve millions of visitors each year. He has launched the statewide Experience Idaho initiative, which will fund needed improvements within Idaho's state parks, to preserve public spaces, and expand recreational opportunities for visitors. Last August, I had a chance to enjoy those recreational opportunities firsthand when Dirk and I biked some of Idaho's trails together.

As Secretary of the Interior, Dirk will continue my administration's efforts to conserve our land, water, and air resources, reduce the maintenance backlog of our national parks, support historic and cultural sites through our Preserve America Initiative, and develop the energy potential of federal lands and waters in environmentally sensitive ways.

Dirk brings wide experience to these important tasks. He has served at every level of government: as Mayor of Boise, as Governor of Idaho, and as a United States Senator. While in the Senate, he chaired the Subcommittee on Drinking Water, Fisheries, and Wildlife, and he chaired the Armed Services Personnel Subcommittee.

He built bipartisan support to enact comprehensive reforms to the Safe Drinking Water Act. Dirk understands that those who live closest to the land know how to manage it best, and he will work closely with state and local leaders to ensure wise stewardship of our resources. 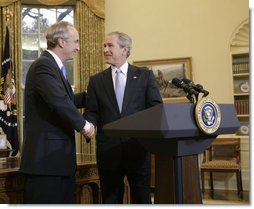 Dirk has had a long and abiding love for nature. When he and his wife, Patricia, were married, they chose to hold the ceremony atop Idaho's Moscow Mountain at sunrise. Dirk said, "I don't think there's a more beautiful cathedral than the outdoors."

I appreciate his willingness to take on this important post, and I ask the Senate to confirm him promptly as the 49th Secretary of the Interior.

Thanks for agreeing to serve.

GOVERNOR KEMPTHORNE: Mr. President, thank you so very much for this honor. I appreciate the confidence that you have shown in me, and for this opportunity that I now have to serve you and to serve the people of the United States. I consider it a great honor and accept your charge to be a responsible steward of the land and the natural resources with which our nation has been blessed.

I'm grateful for the honor that I've had to serve the citizens of Idaho. For more than 20 years, in elected positions, I've had that privilege. I look forward to continuing my service now to this nation, if confirmed by the Senate, as Secretary of Interior.

My wife, Patricia, our children, Heather and Jeff, our new son-in-law, Drew, have been by my side throughout my public service. They've been a source of great encouragement and support and have allowed me to pursue my passion of helping people, finding solutions to problems, and making our communities and our state a better place to live, to work and to raise a family. I thank my family for that love.

I look forward to going to Capitol Hill and meeting with my former colleagues in the United States Senate, to talk with them about the heritage and the history of our great nation, the needs of those who live in Indian country, and the management of our natural resources.

Mr. President, one of the hallmarks of my public service has been my ability to bring people to the table and to work together to build consensus. I pledge to you and to the American people that I will continue in that role of reaching out and finding solutions.

I heard a clear direction from you, Mr. President, when we met earlier today. You stated that if confirmed, you want me to reach out to all constituent groups, to seek bipartisan support, to find common ground, and to build consensus. Whether on a hike or a bike ride, as you've referenced, in Idaho, or as recently as a conversation today, I truly appreciate and respect your genuine enthusiasm for this great land of ours in all of its grandeur and its essence.

Mr. President, once again, I thank you for this awesome honor and responsibility. I'm ready to serve the people of the United States. And God bless America, the beautiful. I would be honored to serve this land.