For Immediate Release
Office of the Press Secretary
March 15, 2006

THE PRESIDENT: Thank you all. Please be seated. Mr. Speaker, thank you for having me here in this beautiful Capitol to celebrate the 50th anniversary of the Hungarian Revolution.

I appreciate being here with the Mayor of our city, Mayor Williams. Good to see you, Mr. Mayor. I appreciate Chairman Hyde. Mr. Chairman, it's good to see you. I thank the members of the diplomatic corps, most particularly, Ambassador Walker. I've heard of him before. (Laughter.) Ambassador Simonyi -- thank you all. Members of Congress, most particularly a beacon for -- a steadfast beacon for liberty is how I'd like to define my friend, Tom Lantos. 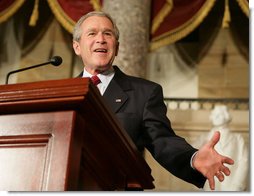 I've come today not only to thank our strong ally, the government of Hungary and the people of Hungary, but I've come to thank my friend, Tom Lantos, and his wife, Annette, for never letting anybody forget that freedom is precious and necessary in our world.

I've come to remind the people of Hungary they've got a great friend in America. I want to thank, by the way, the Hungarian Americans who are here with us today. You've made a significant contribution to our country.

You know, one of the interesting examples of Europe that I try to explain to our people is that for a hundred years there were war, where a lot of people lost their lives and a lot of Americans lost their life. But today Europe is at peace. Europe is whole, free, and at peace. And I believe the reason why is because democracy has taken hold on that continent. And one of the leading lights of democracy has been Hungary.

God bless you all. (Applause.)