For Immediate Release
Office of the Press Secretary
March 14, 2006

THE PRESIDENT: First of all, it's great to be here in upstate New York. As you can see, a special person has greeted me at the airport.

Jason, mind if I call you J-Mac?

THE PRESIDENT: I'll call him J-Mac. You can call me George W. (Laughter.) 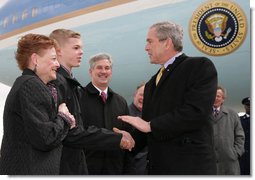 So I want to thank you for being here. You probably didn't realize the impact you were going to have on people all across America and around the world when you made those six 3's. I've kind of gotten off the courts these days because I'm getting old, but if I got back on the courts, I'd need a lesson -- (laughter) -- on how to rotate that ball. But let me have that -- (holding up a sign with Jason's picture on it) -- kind of looks like you.

Anyway, thank you all for coming. God bless. I appreciate the wonderful story that's come out of your family.

Q Mr. President, how did you hear about the story and what's your reaction?

THE PRESIDENT: Saw it on TV. Saw it on TV and I wept, just like a lot of other people. It's just one of those stories that touched a lot of people's hearts.

Q Did somebody play it for you, or did you just see it?

THE PRESIDENT: I can't remember exactly how it happened. Probably somebody played it for me, you know, being the President and all. But it's a wonderful tale.