For Immediate Release
Office of the First Lady
March 14, 2006

Mrs. Bush's Remarks After Touring the "Divine and Human: Women in Ancient Mexico and Peru" Exhibit
National Museum of Women in the Arts
Washington, D.C.

MRS. BUSH: Hello, everybody. We're so happy to be here at the opening of this show. This show, Divine and Human: Women in Early American Hemisphere, Peru and Mexico imagery, was actually -- the show was done both by Dr. Karp Toledo, the First Lady of Peru, and Marta Sahag n Fox, the First Lady of Mexico. They put this show together and it was in Mexico City and Lima. And I knew about it, of course, because they sent me a catalogue and we talked about it. 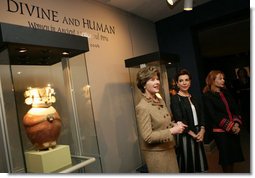 So about a little less than a year ago, when Mrs. Toledo was here, we talked about bringing the show here for the people of the United States to be able to see these unbelievable images of women from a very, very early time in Mexico and Peru. And we thought the National Museum of Women in the Arts would be the perfect venue for this show and, fortunately, they thought so, too, and we were able to work with them very quickly to install this show so that people of the United States will have a chance to see these wonderful pieces that belong to Mexico and Peru.

So I'm so thrilled that we're here for the opening of it. I think it's magnificent. I think the pieces are really very interesting. They're interesting for our children to see because they really show what a heritage we have in our hemisphere; a really very, very organized and intellectual society -- early societies that had a lot of things that people don't think early Americans, people who lived in the American hemisphere, would have had.

So I want to encourage families to come see this great show. I know that the National Museum of Women in the Arts already does training courses for teachers, so teachers can come back and bring their children to this show. But I also want to especially congratulate Mrs. Toledo and Mrs. Fox for putting this wonderful show together and thank them for sharing it with the United States, so that we can also see it here and learn about these very early civilizations in Mexico and Peru.

Q Mrs. Bush, I was wondering, what relevance does it have for today's women, when you look back in -- I mean, people --

MRS. BUSH: Well, it's very interesting to see how -- of course, we all know, I mean, we already knew that women have always had a place in society as mothers, as the bearers of children, as really the women -- the people who continue each generation. And we knew that, and that's a central theme of a lot of these figures.

What we didn't know that we've just discovered in a couple of the tombs that have just been opened is that women also were priestess, they also played a central role in civil society, in a religious way, as well as leaders. And we see that from a lot of the artifacts that are here. A lot of these things we just guess about, because there's no way really to know what they mean. For instance, there is one figure, the smiling face, that we kept looking at here, and a lot of these figures would be in tombs and we don't really know what that represents. But it's very interesting to see what women's role has always been as the mother, as the food provider, as the cook, obviously, but also very, very important in agriculture which, of course, is the basis of life still today, but certainly then.

And one thing that is also interesting that's come out is how advanced these civilizations were in agriculture, how much science they knew about raising maize, for instance, that was large enough that you could grind it for corn flour.

Q Do you think U.S. is prepared to have a woman as President?

MRS. TOLEDO: I would like to thank, most especially, Mrs. Laura Bush and Mrs. Marta Fox for participating in this wonderful exhibit. It has been an honor for us to be able to show our pieces, to work together. This is the work of more than over a year -- we've been working now for two years on this subject. And we agreed that this takes place between three wives of Presidents of three different nations. And we're extremely, extremely happy about the fact that we can show our ancient civilizations with their technology, their sophistications, how they considered women back in those days, how much modern times should learn from those days what our archaeological diggings, our new scientific evidence now shows a completely different place for pre-Hispanic women. The tombs that we have been opening up show a very, very big importance of the women as priestess, as leaders of their communities, as being in charge of regenerating lives.

So these are extremely important elements for us to show in the United States to the public. We know that a lot of children, a lot of teachers -- we saw them yesterday taking the tour -- and we're very, very honored by this because we're on the same continent, we are partners, this is an event that shows solidarity and that's the way we want to be seen. We want to be seen -- you see a lot of food, food processing and genetic working on the food was extremely important back then. And we always say that our Inca Empire was able to satisfy the food needs of everybody, which is not the case today. So somehow we think that those people were more civilized back then than we are now, both ecologically and socially. And this is for us a very, very good moment.

The amount of work that went into this preparation, in want to underline, has been very, very big. We want to congratulate and thank very especially all the sponsors from the private sector. And, of course, we want to congratulate very much all the board for this museum. And we thank you, the press and the media, for collaborating with us in the recuperation of our pieces of Machu Picchu which are at the Peabody Museum at Yale University.

MRS. BUSH: Thanks everybody, good to see you all.