For Immediate Release
Office of the First Lady
March 13, 2006

Mrs. Bush's Remarks in Honor of the Visiting Guests from the Mothers to Mothers-To-Be Programme in Capetown, South Africa
The East Room

MRS. BUSH: Thank you, everyone. Thank you so much. (Applause.) Please be seated.

Distinguished guests, welcome to the White House. And welcome, mothers, to the United States of America.

There are two members of the diplomatic corps who are already with us. And we're expecting the Ambassador from South Africa. But I want to recognize Ambassador Andrew Daraja, from Tanzania, and Ambassador Zac Nsenga, from Rwanda. Where are they? Both of them. (Applause.) 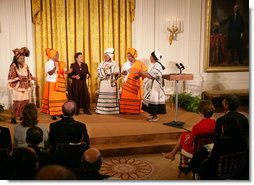 Anne Veneman, the Executive Director of UNICEF. UNICEF is a partner in a number of projects that will work with children with AIDS around the world. Thank you very much, Anne. (Applause.)

And I also want to acknowledge and thank the State Department's International Visitor Program which is sponsoring this trip; also the many private sector foundations, NGOs, and many, many others who have pledged their time and resources to stop the spread of HIV and AIDS.

Last July, I had the privilege of visiting South Africa. And while I was there, I went to hospitals and centers where great work is being carried out in the fight against HIV and AIDS. The United States supports these efforts through the President's Emergency Plan for AIDS Relief, known as PEPFAR. And, of course, the United States is just one partner in this global effort.

One of the highlights of my trip last summer was meeting these mothers who are behind me today at the Mothers to Mothers-to-Be Project outside of Cape Town, South Africa, in a township close to Cape Town.

Mothers to Mothers-to-Be is implemented at local hospitals and clinics in townships, such as the one I visited, in South Africa. There, when mothers go for prenatal care they often discover after testing that they are HIV-positive. After diagnosis, they are paired with mentors -- other mothers who have been through the Mothers to Mothers-to-Be Programme and they are living successfully now on antiretroviral treatment.

Mother-mentors provide immediate comfort, hope and guidance at a critical time. They are living proof that women can enjoy long lives with HIV, and they can avoid transmitting HIV to their newborn babies.

Mothers to Mothers has several objectives: First, doctors treat HIV-positive women with life-saving medicine and help them stay on treatment throughout their pregnancies. Second, mothers achieve financial and personal independence through training and work opportunities. Third, mentors help mothers find the courage to reveal their HIV status to their loved ones, so they can get the help they need and overcome the stigma associated with HIV and AIDS. And finally, women use education to break the cycle of HIV transmission, so that South Africa's next generation will be HIV-free.

Some of the mothers told me their stories when I was there, and I wanted the people of America to hear their voices, as well, so I invited them to the White House. Today, we welcome our friends from South Africa. And we thank everyone who worked to make this visit possible.

This morning the mothers will begin a very full schedule, which includes a symposium at Georgetown University this afternoon; and continues through a week with visits to U.S. agencies and institutions involved in HIV and AIDS research, education, prevention, treatment, and care.

When I was in South Africa, I visited a Mothers-to-be clinic in a township called Khayelitsha, which means "new home".

South African women who are pregnant and HIV-positive have found a new home of sorts in the Mothers to Mothers-to-Be program at the Khayelitsha Maternity Unit. When I was there, I met the unit's senior site coordinator, Babalwa Mbono.

In 2002 she was married and pregnant with her second child when she learned that she was HIV positive. She learned how to manage her HIV infection with the help of Mothers to Mothers-to-Be, and she also managed to have a beautiful, healthy baby who is HIV-negative.

Today she uses her experience to help change the lives of HIV-positive mothers-to-be who seek comfort and courage during their pregnancies. Ladies and gentlemen, Babalwa Mbono. (Applause.)

MRS. BUSH: They were terrific. Now, everyone can see why I wanted them to come to the White House. 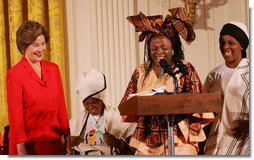 Ambassador from South Africa has just come in. Thank you very, very much for joining us this morning, Ambassador. (Applause.)

This is a morning for celebrating. We celebrate these voices. And we celebrate motherhood, and the bond that all mothers share. A mother's love is powerful, and the kinship between mothers is strong -- it transcends all geographic borders and physical boundaries.

I cherish the bond I have with other mothers. Our children mean the world to us, and that brings us together no matter where in the world we might live. As a mother, I know it must seem like the end of the world to learn that you have HIV or AIDS, and to think that your baby might be born with HIV, too.

Having your family devastated by AIDS might seem like a nightmare, but for too many people, it's a reality. Part of the problem is that because of the stigma of being HIV-positive, women don't seek the help they need. They face their disease silent, alone and afraid. But they don't have to be afraid. And they are not alone.

Mothers to Mothers helps mend hearts broken by a diagnosis of HIV infection. Pregnant women learn how to live well in spite of infection. Once they learn to live with HIV, they can fulfill their dreams of seeing their children grow up healthy and strong. The program helps break the stigma of HIV and AIDS by teaching, training and befriending the expectant mothers who have tested positive.

We know that HIV/AIDS is a crisis of epidemic proportion that hits African women and children the hardest. In South Africa alone, 370,000 people die from AIDS each year and millions of orphans are left behind.

Addressing the crisis is especially difficult in countries with little or no health infrastructure or education. Because of these challenges, people wait too long for diagnosis and treatment -- and children often suffer the most because if they're even on antiretrovirals, their rapid growth requires constant adjustments to the complicated dosing.

The need is great, but the goodwill of the world is greater. Thanks to the support many countries and organizations -- and with the help of PEPFAR seed money, Mothers to Mothers centers are sprouting up across Africa. They're building momentum and rebuilding lives.

Mothers who graduate from the program can become mentors themselves, and that's what all of these mothers are. And they're paid for the work that they do. Others learn the marketable skill of beading through a program called "Mothers Creations". They make purses and belts and cell phone holders and bookmarks that are sold on the international market. Most of the people on my staff wear their staff credentials on lanyards made by the mothers. And you can see other examples later today at the Georgetown symposium.

Thanks to the Mothers Programmes, women are literally earning their own independence. And independence is vital to defeating HIV and AIDS.

The United States is proud to support Mothers-to-Mothers and other effective programs. The President's Emergency Plan for AIDS Relief is a five-year, $15 billion-dollar initiative that supports prevention, treatment and care for people with HIV and AIDS, including children.

In the last two years, PEPFAR has provided $238.7 million to South Africa. The President's 2006 budget includes an additional $221.5 million. Mothers to Mothers benefits from this partnership, as do many other organizations.

In Tanzania, for example, I met a woman named Janet Saria, who has been living with HIV since 1990. Janet gets help from a faith-based social services agency in Dar especially Salaam called PASADA, which is a PEPFAR partner. Janet said, "PASADA has helped me come back to life."

Thanks to partnerships between PEPFAR and local organizations, thousands of women are coming back to life. They are learning how to live with HIV, rather than preparing to die from it. And they are giving life to healthy babies, free of HIV.

Today, I'm pleased to announce a new pediatric AIDS treatment initiative that will further our commitment. It's a groundbreaking and historic alliance. This partnership will promote better and more effective treatment for children living with HIV/AIDS.

The Unites States, multilateral organizations including UNAIDS and UNICEF, and innovator and generic pharmaceutical companies have agreed to contribute more and greater resources to the cause. Members of this alliance will identify scientific obstacles to treatment for children. They'll take practical steps to give parents and lay people simpler and safer antiretroviral medicines to use for children. They will share best practices in science and medicine. And they'll develop systems to speed up the review, the approval, the manufacturing and the availability of pediatric antiretroviral drugs.

Many of the partners in this alliance are here today. President Bush joins me in thanking you, and pledging our commitment to work with you to achieve the goal of an HIV-free generation.

I now have the pleasure of introducing a leader in our work to prevent and treat HIV/AIDS. Ambassador Randall Tobias is the United States Global AIDS Coordinator. He supervises all U.S. international HIV/AIDS assistance and coordinates efforts among U.S. agencies and departments that deliver assistance.

Last year Ambassador Tobias joined me on my trip to Africa. We witnessed the results of U.S. support for African leadership and saw the lives that are being saved because of our partnership.

In January, President Bush appointed Ambassador Tobias to be the first Director of Foreign Assistance for the U.S. Government, and also nominated him to lead the US Agency for International Development, USAID. We look forward to his Senate confirmation.

In one of the most beautiful, poignant books of our time, Cry, the Beloved Country, South African author Alan Paton wrote, "Nothing is ever quiet except for fools."

President Bush and I salute the mothers on this stage for having the wisdom and the courage to speak and sing about their conditions and their country. Their voices give us hope and proof of progress in South Africa.

This gathering today, and this week-long exchange, will reinforce what many of us here today already know: And that is, the people of the United States are deeply concerned about the implications of HIV and AIDS around the world. We care about mothers and children everywhere. And we are honored to work with you to make a difference in their lives.

On behalf of President Bush, thank you for coming. And may God bless mothers everywhere. (Applause.) The Ambassador from South Africa is here with us. (Applause.)

And now if everyone will join us for brunch in the Dining Room.