For Immediate Release
Office of the Press Secretary
March 11, 2006

THE PRESIDENT: Good morning. I want to thank General Meigs for being here to brief me about tactics on the ground in Iraq. One of the things that the Secretary and General Pace are constantly doing is briefing the Commander-in-Chief as to the nature of the enemy, what the enemy is trying to do to shake our will, and how we're adjusting, how we're constantly adapting our tactics on the ground to achieve a victory. 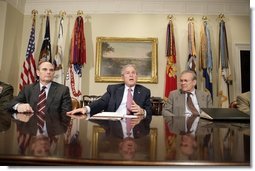 We face an enemy that will use explosive devices in order to shake our will; in order to foment violence in Iraq; in order to try to convince the American people that we can't win in Iraq. That's what they're trying to do. And the General has spent a lot of time thinking about the enemy's tactics and techniques, and how our military can adjust to them.

And so, General, thank you for being here. I appreciate your time. I'll answer a couple of questions. Deb.

Q Mr. President, can you tell us your reaction to the arrest of your former Domestic Policy Advisor, Claude Allen?

THE PRESIDENT: If the allegations are true, Claude Allen did not tell my Chief of Staff and legal counsel the truth, and that's deeply disappointing. If the allegations are true, something went wrong in Claude Allen's life, and that is really sad. When I heard the story last night I was shocked. And my first reaction was one of disappointment, deep disappointment that -- if it's true -- that we were not fully informed. But it was also one -- shortly thereafter, I felt really sad for the Allen family.

Q Sir, are you concerned about the rift that the Dubai Ports has opened with the Republican Party?

I've read all the stories about this rift, or that rift. That's typical Washington, it seems like to me. I am looking forward to continuing to work with the leadership in the United States Congress to pass an agenda that will keep America the economic leader of the world and will keep this country secure. And next fall I'm looking forward to campaigning with our candidates. I'm convinced ours is the party that has got an agenda for the future, and ours is the party that has preformed. 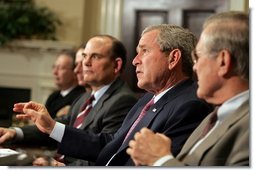 Q Mr. President, are you concerned, with reference to the IEDs, are you concerned that the sophisticated weaponry our troops are facing now might be coming from foreign, neighboring countries? And if so, what are our courses going about --

Our call is for those in the neighborhood to allow Iran -- Iraq to develop a democracy. And that includes our call to Iran, as well as to Syria. We have made our concerns known, and we will continue to make our concerns known. It's in the interests of the neighborhood that Iraq develop to be a peaceful democracy. It's important for countries to have stable, peaceful, prosperous countries on their border. Prosperity in one nation will help prosperity in other nations. It's important for our friends in the rest of the Middle East to help this new democracy.

And so, yes, we're interesting in negative influence; we're also interested in positive influence. And we call on people to be a positive influence, to help this new democracy emerge. And I'm optimistic that the Iraqi people will overcome the challenges they face.

And my optimism is based upon reality on the ground. One, there were some people trying to, obviously, foment sectarian violence. Some have called it a civil war. But it didn't work. Secondly, I'm optimistic because the Iraqi security forces preformed, in most cases, really well to provide security. All but two of the provinces of Iraq, after the blowing up of the mosque, were settled. I'm positive and optimistic about the development that the Iraqi forces are achieving.

I know we've got to do more work in the police forces. We have said that very clearly. General Casey has called the year 2006 the year of police training, and we'll continue to work to train the police. I'm optimistic that the leadership recognizes that sectarian violence will undermine the capacity for them to self govern. I believe we'll have a unity government in place that will help move the process forward. I fully recognize that the nature of the enemy is such that they want to convince the world that we cannot succeed in Iraq. I know we're going to succeed if we don't lose our will.