For Immediate Release
Office of the Press Secretary
March 8, 2006

THE PRESIDENT: It's good to hear people hammering, isn't it?

GOVERNOR BARBOUR: It really is. It's great for us in Mississippi.

THE PRESIDENT: It is. People are building their lives back. And one of the reasons I've come down here is to remind people that there's still a lot of people hurting. And I talk to the Governor all the time about what we can do to make sure this part of the world rebuilds. It's great to see rebuilding. 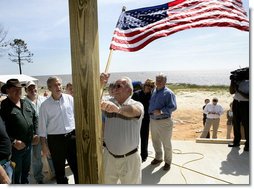 Haley has been real good about talking to us about a variety of issues. I want to thank you for your leadership.

GOVERNOR BARBOUR: Mr. President, thank you. Let me just say publicly, thank you. In the last day, President Bush and the Bush administration has made the fifth extension of the deadline for the government to cover 100 percent of debris removal and other emergency measures. And this extension is to June 30th, when we ought to be through.

And first I want to say thank you for that. You know, it's been a huge issue for these little communities, that they don't have any tax base -- so thank you for that. That was made public yesterday. I'm glad to announce today that last night HUD approved our plan for our homeowner grant program. We intend to make $4 billion of community development block grant money from the federal government available to Missippians, like Jerry and Elaine, so that they can rebuild their homes or build new homes, to get themselves out of the flood plain.

Tomorrow, we have been allowed by HUD to post our plan. You can see it on our website, mshomehelp.gov, and we'll have to have a two-week comment period, at the end of which we'll start taking applications. But somebody can go onto the website now, Mr. President, or at noon tomorrow, and find out all the information they need to get, what all the rules are. And I'm pleased to say that the Akins qualify.

GOVERNOR BARBOUR: They built this house up above the new flood plain, 25 feet above sea level, which is one of the requirements so that we reduce risks. Again, I thank you for doing that.

THE PRESIDENT: I always felt that it was really important to say to the Governor and to local folks, come to Washington with a plan to help people rebuild. I really didn't want the plan to be designed by Washington people; I wanted it to be designed by local folks. And Haley has put together a Mississippi plan. He not only put the plan together, he also came to Washington, D.C. and helped get the plan funded -- with the help of two fine United States senators --

GOVERNOR BARBOUR: The best pair of United States senators in the country.

THE PRESIDENT: -- and members of the House. And so I want to congratulate you and your team for putting together a good plan. Our job and our purpose is to help people like the Akins rebuild. And we want this part of the country rising up from the devastation. You know, people really didn't lose their spirit down here. But our job is to make sure that that spirit is able to kind of recapture the hope and optimism of the people and let that spirit flourish. 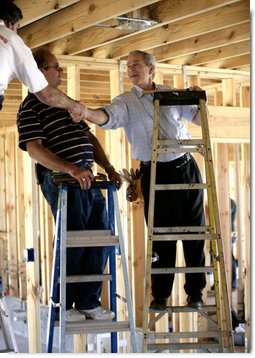 And I want to thank you for being a good leader. I appreciate you all having us. Listen, thanks. After all that work I've done, I'm thirsty. (Laughter.)

MR. AKINS: Yes, sir. We have some lemonade and we have some refreshments.

THE PRESIDENT: You do? That's good. The other thing that's interesting is that we've got the Allens here from the Allen Brothers Construction Company, he's a local --

You know, one of the interesting things is that there is going to be a lot of work, and here are the entrepreneurs with their sons helping to build this man's house. It's neat to be with them. Small businesses, if they seize the opportunity, are going to flourish. And that's what we want. These small construction companies are going to have work to do.

The other thing about the Martins, one of the boys won the Purple Heart in Iraq. There he is right there. It's my honor to congratulate him for serving the country. Thank you. At any rate --