For Immediate Release
Office of the Press Secretary
March 7, 2006

Every year, citizens around the world commemorate International Women's Day. I've been privileged to meet thousands of women from many nations, and I believe that women everywhere share the same dreams -- to be educated, to live in peace, to enjoy good health, to be prosperous, and to be heard. 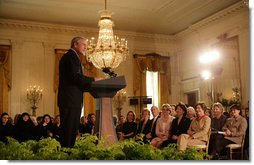 There are encouraging signs for progress for women in many parts of the world, and I'm proud to be married to a man whose policies promote this success. But don't just take my word for it. Look at his administration, where strong and talented women serve at the very top levels of government.

Consider his policies in Africa. Girls go to schools there, thanks to scholarships from the African Education Initiative. Women receive antiretroviral drugs and deliver babies free of HIV because of the President's Emergency Plan for AIDS Relief. In Afghanistan, young girls go to school and women serve in government because America helped liberate the Afghan people. Last week in Kabul, Dr. Karzai, the wife of President Karzai, told me that six million Afghan children are now in school, and nearly half of that number are girls.

As we celebrate International Women's Day and Women's History Month, we honor men and women who work together to advance justice, dignity, and opportunity for women. And no one is more committed to those ideals than my husband, our President, George W. Bush. (Applause.)

THE PRESIDENT: Thank you all. Thank you, Laura. Welcome to the White House. We like to call this the people's house. I want to remind people from around the world that we're only temporary occupants here -- but we're trying to make the most of our time here.

I want to welcome you all as we celebrate Women's History Month and International Women's Day. Thanks for coming. We recognize the many contributions women have made to our country. We also honor those who have helped bring equality and freedom to women around the world.

A lot of strong women have influenced my life. (Laughter.) Beginning with my mother. (Laughter.) She told me to say that, by the way. (Laughter and applause.) I am blessed to have a strong wife. (Applause.) And we are raising two young women to become independent, capable risk-takers -- (laughter) -- so that they can realize their dreams.

I have been blessed to have strong women in my government. My administration is better off to have really capable women who feel comfortable marching in the Oval Office and giving the President their frank advice. (Laughter and applause.) 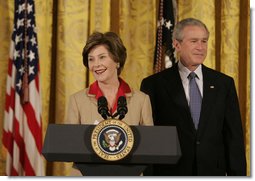 I want to thank Secretary of Labor Elaine Chao, who is with us; Secretary of Education Margaret Spellings -- she's been giving me frank advice ever since I was the governor of Texas. (Laughter.) I want to thank Karen Hughes -- Ambassador Karen Hughes, the Under Secretary for Public Diplomacy and Public Affairs. She's been really giving me a lot of advice. (Laughter.) Paula Dobriansky, the Under Secretary for Democracy and Global Affairs; Harriet Miers, my attorney. By the way, for those of you who aren't familiar with America, it's always good to have a good attorney. (Laughter.) Harriet Miers is my attorney. She gives me legal advice.

Fran Townsend is in charge of our -- part of the National Security Council in charge of homeland security. Protecting our homeland is a vital part of America, and I rely upon a very capable, strong woman to give me good advice.

I want to thank my friend, Pat Brister, who is the U.S. Representative to the United Nations Commission on the Status of Women, for joining us. Pat is -- there she is -- from Louisiana, where Laura and I will be tomorrow, by the way.

I want to thank Congresswoman Judy Biggert from the state of Illinois. She's with us. For those of you who are unfamiliar with our Congress, we have a lot of very capable women who are running for office and have become elected and making a big difference in the halls of Congress. I appreciate the members of the Diplomatic Corps who have joined us. Thank you all for coming. It's good to see so many ambassadors and ambassadresses here today. (Laughter.)

I want to thank the members of the International Republican Institute and the National Endowment for Democracy. Thank you for hosting our international delegates. Thank you for helping them in their training exercises and sharing expertise and compassion. I want to thank the delegations from Afghanistan and Iraq and around the world for joining us today. You're welcome in the United States of America -- I hope you feel that way. (Applause.)

The struggle for women's right is a story of strong women willing to take the lead. That's particularly true in the United States of America, where women like Susan B. Anthony and Alice Stone Blackwell and Elizabeth Cady Stanton and Rosa Parks changed the course of our nation's history. Our history was altered because strong women stood up and led. These women broke down barriers to equality. We weren't always an equal society in America, and it required strong leadership to help make America a more equal place. And we're a better place because of the leadership of women throughout our history.

Women today are shaping the future of America as scientists and entrepreneurs and teachers and astronauts. They serve our nation with honor and distinction in our Armed Forces. The distinguished leadership of women like Secretary of State Condi Rice -- where is she? She had an excused absence -- (laughter) -- and Justice Sandra Day O'Connor has helped open doors for women for future generations.

Across the world, the increasing participation of women in civic and political life has strengthened democracies. A democracy is strong when women participate in the society. The nation of Liberia recently elected its first woman President, and Laura and Secretary Rice were there to witness her swearing-in. I look forward to welcoming her to America, by the way.

Women lead governments in Germany, in Chile, and the Philippines. In Rwanda, nearly half of the members of parliament are women. And women are now holding more parliamentary seats in nations like Morocco and Jordan and Tunisia.

In the last four years, we have also seen women make great strides in Afghanistan and Iraq -- countries where just a few years ago women were denied basic rights and were brutalized by tyrants. Today in Afghanistan, girls are attending school. That speaks well for Afghanistan's future. Women hold about 20 percent of the seats in the National Assembly. Nobody could have dreamed that was possible five years ago. In last fall's elections, about 40 percent of the voters were women. In Iraq, women are voting in large numbers, and when the new Iraqi parliament takes office, women will hold about one-quarter of the seats.

The United States is working to increase opportunities for women in these two emerging democracies. Through the Iraqi Women's Democracy Initiative, we're providing funds for Iraqi women to receive training in political leadership and learn about the legislative process, the judicial system, and how to defend and promote human rights.

In Afghanistan, we're helping women find ways to join the political process at the local level, and to acquire the skills they need for advocacy and communication. We're working with the private sector in America to help Afghan women travel abroad to learn more about the political process and to be able to exchange ideas with fellow women, just like which is taking place here in America today.

Our work to help build vibrant and functioning democracies in Afghanistan and Iraq is part of a larger effort to encourage progress across the broader Middle East. We refuse to accept the status quo in the United States of America, particularly when we find women repressed. As women become a part of the democratic process, they help spread freedom and justice and, most importantly of all, hope for a future.

One important program is the Women's Democracy Network, which is holding its inaugural meeting this week in Washington. This conference provides an opportunity for women leaders around the world to connect with each other and serve as mentors for women in developing democracies so they can help shape the future of their nations.

As we work to advance the equality of women in the world's newest democracies, we must remember that many women in other countries around the world are still struggling for basic rights in places like Iran and North Korea and Burma. America will help women stand up for their freedom, no matter where they live. (Applause.)

Recently I welcomed two women from Belarus who were concerned about the repressive nature of their government. We stand with the women in Belarus who advocate human rights in a run-up to this month's election. America will continue to support courageous reformers around the world -- women like Burmese dissident Aung San Suu Kyi, who has spent years under house arrest for her efforts to bring democracy to her nation.

We will continue to fight the threats to women across the world. We'll continue working with nations around the world to end the sexual exploitation and the trafficking of women and young girls. It breaks our hearts, our collective hearts, to realize many young girls are sold into sex slavery and we will use our prestige to stop that evil process. (Applause.)

We will continue working to fight the transmission of HIV/AIDS. America is proud to lead the world in the struggle to defeat this pandemic. We understand that by defeating the pandemic of HIV/AIDS we will help children and women who have been disproportionately affected by this horrible pandemic.

We live in extraordinary times. These are exciting times. They are times that require a firm conviction in our beliefs that all people are created equal. We've seen the fall of brutal tyrants and the rise of democracy. We're also seeing women take their rightful place in societies that were once closed and oppressive. And the United States welcomes the arrival of women into these oppressive societies. There's no doubt in my mind, empowering women in new democracies will make those democracies better countries and help lay the foundation of peace for generations to come. (Applause.)

So Laura and I welcome you to the White House. We're really glad you're here. We're so glad you're here, we're about to throw a reception on your behalf. (Laughter.) And we wish you to enjoy it.