For Immediate Release
Office of the Press Secretary
March 2, 2006

President's Visit to India and Pakistan

PRIME MINISTER SINGH: Mr. President, distinguished journalists, ladies and gentlemen, I've already welcomed President George Bush and Mrs. Laura Bush on this, their first visit to India. I would now like to welcome the U.S. CEOs who have traveled to India for this historic meeting.

The President and I have just concluded our official discussions and I'm sure he shares my -- (inaudible) -- executive officers. The establishment of this group last year was an important initiative stated by the President -- (inaudible) -- in which the private sectors of our two countries could interact and build a road map for promoting cooperation. I would like to thank the two co-chairs, Mr. William Harrison and Mr. Ratan Tata, and their colleagues for the excellent work done in relaying the report which they will now present. 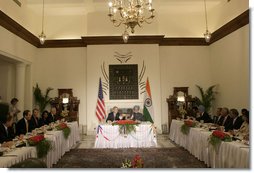 I have been briefed on the main recommendations, and I am very happy to say that some of the recommendations are already reflected in the decisions which the President and I have issued today. I will have more to say on other recommendations a little later. I now invite President Bush to share his thoughts and initiate the discussion. You have the floor, sir.

PRESIDENT BUSH: Well, thank you, Mr. Prime Minister. I want to thank the CEOs for joining us from both India and the United States. Thank you all for coming.

The Prime Minister and I have had some really constructive dialogue, starting in Washington, D.C., and then here in New Delhi. I would characterize our relationship as warm and results-oriented. Warm because he's a humble man who cares deeply about the people of India, and he's a good thinker; he can see beyond the horizon, which is necessary.

I say results-oriented because it's one thing to shake hands and smile for the cameras; it's another thing to actually deliver results on behalf of our people. I am a firm believer that relations with India are important to the United States, it's important for the people of the United States, it's important for people who want to work in the United States. And to the extent that we are able to achieve mutually beneficial goals, to eliminate barriers, and to hear from people who are actually on the front lines creating jobs, I think is useful for those of us in government.

So I'm looking forward to hearing some more on this. One of the action steps that we agreed to take last July was to set up this forum. And, Mr. Prime Minister, it's good to see things happening. It's good to see results. And this is a result of an historic meeting, set of meetings.

And so I want to thank you for your hospitality. Thank you all for coming. I'm looking forward to hearing what folks have to say. And once you say it, once we figure out kind of the roadblocks for further development, you have my commitment that we will work to remove those roadblocks.

Thanks for having me.