For Immediate Release
Office of the Press Secretary
March 1, 2006

I conveyed upon President Bush's arrival to him that when the Afghan people come to know that you are here today, but when they see on the television that we did not provide you the kind of hospitality perhaps we want to provide you, I'll be in serious trouble. (Laughter.) But I'll have a lot of explaining to do to the Afghan people. 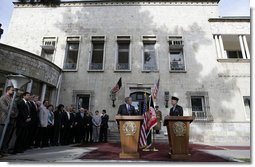 Mr. President, welcome to Afghanistan. We owe a great, great deal in this country's rebuilding -- peace, democracy, the strong steps toward the future -- to your support, to your leadership, to the American people, and to the way you have given your hand to the Afghan people.

I'm not going to go into the details of all that you've done for us -- it's from the defeat of terrorism to peace in Afghanistan, to democracy, to reconstruction, to the success of the whole process. Thank you very much, Mr. President, and welcome to Afghanistan.

PRESIDENT BUSH: Thank you, Mr. President. Thank you for having me. Laura and I are honored to be here. It's such a thrill to come to a country which is dedicating itself to the dignity of every person that lives here.

First of all, I want to thank you for the fantastic lunch we just had. I did get a taste of Afghanistan hospitality, and it's good. I appreciate you introducing me to many of the leaders of your government. I'm impressed by their dedication to making sure the experience that you're going through, experience of growing a democracy that honors and respects all, is successful.

One of the messages I want to say to the people of Afghanistan is it's our country's pleasure and honor to be involved with the future of this country. We like stories of young girls going to school for the first time so they can realize their potential. We appreciate a free press. We are enthralled when we see an entrepreneurial class grow up where people are able to work and realize their dreams. We understand the importance of having a well-trained military dedicated to the sovereignty of the country and to the peace of the people. We're impressed by the progress that your country is making, Mr. President. A lot of it has to do with your leadership.

Today, I not only had a good long visit with my friend, the President, but we had a good visit with a lot of the folks who make this government work. From here, I'll go to cut a ribbon at our new embassy. The embassy should be a clear statement to the people in Afghanistan that we're dedicated to helping. And then I'm going to go out to the base and thank some of our troops who are here to protect our country, and, at the same time, help the people of Afghanistan protect themselves.

One of the things I told the President, and told the members of your team and your cabinet and the government, is that people all over the world are watching the experience here in Afghanistan. I hope the people of Afghanistan understand that as democracy takes hold, you're inspiring others. And that inspiration will cause others to demand their freedom. And as the world becomes more free, the world will become more peaceful.

And so I come as a friend, an ally, and a person like you, dedicated to peace. Thank you for having me.

PRESIDENT BUSH: Why don't we take a couple.

PRESIDENT KARZAI: Two on each side?

PRESIDENT KARZAI: He did?

PRESIDENT BUSH: Hopefully he'll tone it down some --

Q I'd like to ask you, Mr. President, there was a time when you talked about getting Osama bin Laden dead or alive. Why is he still on the loose five years later? And are you still confident that you'll get him?

PRESIDENT BUSH: I am confident he will be brought to justice. What's happening is, is that we got U.S. forces on the hunt for not only bin Laden, but anybody who plots and plans with bin Laden. There are Afghan forces on the hunt for not only bin Laden, but those who plot and plan with him. We've got Pakistan forces on the hunt. And part of my message to President Musharraf is, is that it's important that we bring these people to justice. He understands that. After all, they've tried to kill him four times. So we've got a common alliance, all aimed at routing out people who are evildoers, people who have hijacked a great religion and kill innocent people in the name of that religion.

We're making progress of dismantling al Qaeda. Slowly but surely, we're bringing the people to justice, and the world is better for it, as a result of our steady progress.

You want to ask somebody? 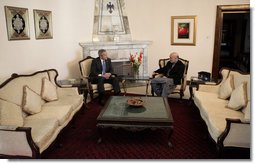 Q Mr. President, allow me to welcome you to Afghanistan first.

Q And I would like to ask you a couple of questions, if I may.

Q Regarding the worsening situation in Afghanistan, the Afghan government says that most of the violence emanates from Pakistan. Will you be discussing in any way this flow of violence in Afghanistan with Pakistani authorities?

Q And my second question is regarding Iran's nuclear program --

Q -- Iran states that its nuclear program is for peaceful purposes, but you seem to doubt them. There seems to be some sort of standoff. You don't think that the standoff will affect the security of the region, and do you think there is a way out of this standoff?

And so we've joined with Russia as part of a diplomatic effort to solve this problem that says Russia will provide enriched uranium to its civilian nuclear power plant, and will collect the uranium after it's been used in the plant.

I'll repeat to you, the most destablizing thing that can happen is for Iran to have a nuclear weapon. And we will work with friends and allies to convince them not to.

Q Sir, you're going on to India from here. How close are you to sealing a nuclear agreement with India? And what does it mean for the trip if you don't get one?

PRESIDENT BUSH: Our relationship with India is broader than a -- than our discussions about energy. Ours is a strategic relationship. It is a relationship that's got strong ties because of economics and our military, our desire to help democracies such as Afghanistan. Our people are talking to the Indians today on the plane and we'll -- (inaudible) -- New Delhi about trying to come to an agreement on a civilian nuclear power agreement. 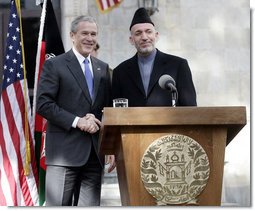 But as I said in my speech in Washington, this is a difficult issue. It's a difficult issue for the Indian government; it's a difficult issue for the American government. And so we'll continue to dialogue and work, and hopefully we can reach an agreement. If not, we'll continue to work on it until we do. It's in our interests and the interests of the United States -- it's in the interests of countries around the world that India develop a nuclear power industry because that will help alleviate demand for fossil fuels. And by alleviating demand for fossil fuels, it takes the price off of gasoline at the pump. And so the faster the Indian economy growS, the more fuel they demand; the more fuel they demand, it affects our gas prices and it affects your gas prices.

PRESIDENT KARZAI: I will give a chance to the Afghan Television, for once.

Q Your Excellency President Bush, welcome to Afghanistan and wish you a pleasant stay. The question is -- it has been four years since the presence of the international forces in Afghanistan. However, the security situation is increasingly deteriorating. What will be your long-term security policy to Afghanistan? And the second part of the question is, how will the U.S. policy be affected in regards to Afghanistan if Osama and Mullah Omar are captured?

PRESIDENT BUSH: It's not a matter of if they're captured or brought to justice, it's when they're brought to justice. The United States is here at the request of an Afghan government elected by the people. We signed an agreement in the Oval Office in Washington, D.C., with the duly elected President of your country, President Karzai. It's an agreement that sets out a strategic relationship. It's an important relationship for our country. It's an important relationship for Afghanistan.

The President has talked to me a lot about this issue, assures me that the government is sincere in its request that the United States and coalition help Afghanistan grow its democracy. Our commitment is firm. Our desire is to see this country flourish and set a great example not only in the neighborhood, but around the world.

See, I hope -- I hope people of Afghanistan understand the people of America have great -- got great regard for human life and human dignity, that we care about the plight of people. We

-- when we saw the devastation in Pakistan, we were quick to respond with help because we care about people. When we heard 73,000 people lost their lives and 2.5 million people were displaced from their homes, it broke our hearts. When we see HIV/AIDS ravishing an entire continent of Africa, we care.

I'm going to repeat what I said before: We like stories, and expect stories, of young girls going to school in Afghanistan. It means a lot to the American people to hear the President say that. It means a lot for people to realize that there is an entrepreneurial class that's beginning to grow. We believe in hope, which is the exact opposite of the ideology of the bin Ladens of the world, and the Taliban.

In our country, you can worship freely. You're equally American if you're a Christian, Muslim, Hindu, or Jew. You're equally American if you don't believe in an Almighty. Under the Taliban and Osama bin Laden, there is no religious freedom. You have no chance to express yourself in the public square without being punished. There is no capacity to realize your full potential.