For Immediate Release
Office of the Press Secretary
February 28, 2006

I welcome my friend to the Oval Office. Every time I meet with the Prime Minister my spirits are raised because he is such a positive, optimistic person. The Prime Minister is a strong leader. He's a man of his word. He has brought stability to the Italian government. Obviously, it's important for an American President to be able to work with somebody in a consistent manner, and I appreciate the stability that the Prime Minister has brought to our close ally and friend. 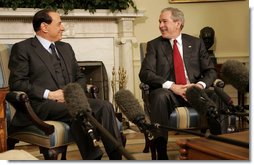 PRIME MINISTER BERLUSCONI: (As translated.) Thank you very much, Mr. President, for your words of appreciation which gave me a lot of satisfaction. On my behalf I have to say that coming here and meeting the leader of a friendly country is the reason for me to go along the path that we decided to follow. It makes me firm in that.

The consensus and agreements which we always have stems from the fact that we share the same values. We both believe the problem affecting the world is to spread democracy. Because only through democracy there can be freedom, and only through freedom can human beings give the best of themselves.

Therefore, I think we can say that we're lucky because the biggest democracy of the world has such a leader who sees problems affecting the world so clearly and proceeds and follows so firmly in this direction. President Bush and the American people have found a firm and sound ally in my government.

After 9/11 we both decided to carry out military operations in Afghanistan. And I think we both gave strong support in the reconstruction of Iraq and in the construction of democracy in that country. And we express our appreciation and we're very close to the American people because of the many --

I want to reassure President Bush and his people that when an American soldier dies for the cause of democracy and freedom in that country we feel that and consider that as a loss for ourselves. But we will continue along this path because we are convinced, as President Bush has said, that only if all democratic states join together we can bring democracy and peace all over the world.

Q Mr. President, there was some more sectarian violence today in Iraq. There have been hundreds, maybe thousands, killed since the bombing of the mosque. Do you fear an all-out civil war? And will the events of Iraq of the last few days affect prospects for a U.S. draw-down?

And to the Prime Minister, do you still want to withdraw Italian troops by the end of the year?

PRESIDENT BUSH: The United States strongly condemns the bombing of holy sites. We believe people should be allowed to worship freely. Obviously, there are some who are trying to sow the seeds of sectarian violence. They destroy in order to create chaos. And now the people of Iraq and their leaders must make a choice. The choice is chaos or unity. The choice is a free society, or a society dictated by the -- by evil people who will kill innocents.

This weekend I spoke to seven of the Iraqi leaders. They understood the seriousness of the moment. They have made their choice, which is to work toward a unity government. The Iraqi people made their choice. Since last December, 11 million people, in defiance of the terrorists and the killers, went to the polls and said, we want to be free.

PRIME MINISTER BERLUSCONI: (As translated.) We have announced a plan to progressively withdraw our troops, which should be completed -- we have to be completed by the end of this year. And this plan has been agreed upon also together with our allies, and with the Iraqi government. Because this what is going to be possible -- (in English) -- why this will be possible.

PRIME MINISTER BERLUSCONI: (As translated.) Why is this going to be possible? Because we have all together with our allies trained Iraqi troops and Iraqi soldiers and the law enforcement so that the Iraqi government itself will be able to guarantee the security of its people through their own forces.

So as far as the province which is under our control is concerned, we have 3,000 soldiers there, troops which will be withdrawn by the end of this year, but we have trained 10,000 law enforcement people who can guarantee the respect of peace.

PRIME MINISTER BERLUSCONI: (In English.) You have a possibility to answer no comment.

Q Mr. President, since you're the final arbiter of the Dubai Ports deal, are you still inclined to approve it? And do you stand by your veto threat?

PRESIDENT BUSH: My position hasn't changed to my message to the Congress. And I appreciate the fact that the companies concerned have asked the Congress for a review of all the security implications.

Let me just make something clear to the American people. If there was any doubt in my mind, or people in my administration's mind that our ports would be less secure and the American people endangered, this deal wouldn't go forward. And I can understand people's consternation because the first thing they heard was that a foreign company would be in charge of our port security, when, in fact, the Coast Guard and Customs are in charge of our port security. Our duty is to protect America, and we will protect America.

On the other hand, this company is buying a British company that manages the ports. And by the way, there are a lot of foreign companies managing U.S. ports. And so my question to the members of Congress as they review this matter is, one, please look at the facts. And two, what kind of signal does it send throughout the world if it's okay for a British company to manage the ports, but not a company that has been secure -- been cleared for security purposes from the Arab world? So I look forward to a good, consistent review. You don't need to interpret. That's a U.S. question.

One at a time.

Q (As translated.) Just a few minutes ago, President Bush praised stability. I would like to know from both of you what role did stability play in your personal relationship and in the relationship between the two countries?

PRESIDENT BUSH: Well, first of all, a personal relationship is based upon mutual trust. And I have found Silvio to be a person of his word. Look, sometimes we don't agree, but at least you know where he stands. He is -- and that matters, by the way, for a person to keep his word. In politics, people always try to look the easy -- find the easy path. I like somebody who makes up his mind based upon the principle.

And obviously there's a practical reason why it's important to have stability. Because if a government is changing every year, it requires a person in my position to constantly have to reacquaint yourself. And that's what I meant by stability. It's much easier to make common policy when you're dealing with a person from one year to the next.

PRIME MINISTER BERLUSCONI: (As translated.) As far as I'm concerned, I can only ask that we brought into politics the values which pertain to the world of work and business, and the world of sport. Because in politics, people changing frequently, their minds and positions are considered to be professional. (Laughter.) While on the contrary in the world of business or the world of sports, a person who changes constantly his position and never keeps his promises is cornered, or even set outside.