For Immediate Release
Office of the Press Secretary
February 27, 2006

THE PRESIDENT: Good morning. Thanks for coming. I enjoyed it last night, I hope you did, too. It was a lot of fun. And thank you all for giving me a chance to come by. What I thought I'd do is say a few things and then answer some questions, if you have any.

We have got a chance to achieve some big things for the country, to lay the stage for peace and to keep America in the lead. And these are goals that both Republicans and Democrats should share. You know, there's a lot of politics here in Washington, so it's -- when you say, well, you know, it's a Republican goal to make America competitive, I just don't agree with that. It should be a national goal. It's a national goal to protect our people. And, therefore, it requires a lot of collaboration throughout all aspects of government. And no better collaborators to implement good policy than our governors. So thanks for giving me a chance to come and share some insights with you. 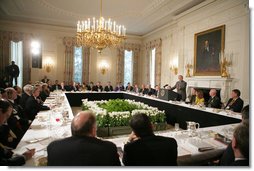 First, one question that ought to be confronting everybody is how do we keep this economy of ours strong? A couple of notable exceptions, like our friends in Michigan and Ohio, in particular -- maybe Washington State -- the overall economy is in great shape. People are working, productivity is up, people own their homes, small businesses are flourishing. And the fundamental question is what can we do together to keep it that way. Part of it is to be wise with taxpayers' money.

I congratulate the states that have done a good job increasing their surpluses; it's a good thing. I can remember a couple of years ago when we were a little worried about deficits at the state level. That's changed. Surplus and tax policy, wise with people's money all go hand-in-hand in terms of making sure America remains competitive. I believe if you take money out of people's pockets it hurts economic vitality and growth.

I know full well that in order for us to be competitive, two other things have to happen. One is we've got to be less dependent on foreign sources of oil. Told the people, shocked them pretty much when I was standing up there as the guy from Texas saying our dependency on oil creates a problem. But I meant it. Dependency upon oil has created an economic problem for us, it challenges our economic security because when demand for oil goes up relative to supply worldwide, it causes the price at the pump to go up. It's like a hidden tax on our people when gasoline prices go up. Dependence on foreign sources of oil creates a national security problem. You hear parts of the world where there is disruption in oil supply as a result of local politics, for example, it affects the United States of America.

I spend a lot of time worrying about disruption of energy because of politics or civil strife in other countries -- because tyrants control the spigots. And it's in our national interest that we become less dependent on oil. And so we've laid out a strong initiative to encourage Congress to continue to spend research and development money to enable us to power our automobiles through additional uses of ethanol; to expand E85 beyond just the current regional -- the region where it's being -- where the corn is being grown, to be able to use other types of biomass to fuel our cars. We think we're very close to that kind of breakthrough. Hybrid batteries are going to make an enormous difference in our capacity to drive the first 40 miles in urban centers without the use of any gasoline. Hydrogen automobiles eventually are going to make a huge difference in enabling us to become less dependent on foreign sources of oil. 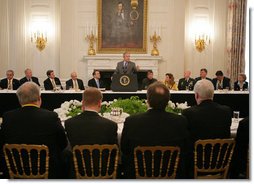 We've got to expand solar power. I went to a facility there in Michigan to see a fantastic company called United Solar. I don't mean to be pushing them, but nevertheless, they're making a great product. I remember going out to Colorado to the facility out there, the research facility on alternative uses of energy. We've got fantastic chances to advance this really important agenda, and we look forward to working with you to do so. It's one of these issues where when we continue to make these technological breakthroughs we'll leave behind a better tomorrow for our children and grandchildren.

The other issue that I know we can work together and must work together is to make sure our children are not only educated in reading and writing, but also in math and science. America must be competitive in the out years. We've got to have our -- we've got to be educating the future physicists and engineers. And we look forward to working with you to help make math and science in our classrooms more of a reality.

As well, we're planning on doubling the amount of federal research dollars for basic sciences. And, recognizing that most of the research in the United States is done at the corporate level, to make the research and development tax credit a permanent part of the tax code. It's really hard to get our companies to invest in research and development if there's uncertainty in the tax code. And Congress allows the R&D tax credit to lapse, and when it lapses, planners say, well, I'm not sure it's going to be around, so why do we want to make investment. So making the R&D tax credit a permanent part of our tax code will help spur continued research and technology. Technology is going to help us stay competitive; it'll help us be the most productive society in the world, which means our people's standard of living is going to go up.

So here are some things we can work on, to get rid of all of the kind of needless politics that tends to be dominating the landscape these days, and focus on things that will help this country remain the leader in the world when it comes to the economy.

I wish I could report to you that the war on terror is over. It's not. An enemy still lurks. They're dangerous people and it requires a comprehensive strategy to defeat, and part of it, of course, is making sure our homeland is secure. If you have any questions on the NSA decision, I'll be glad to give it to you -- be glad to answer them.

The other part of the offense -- of the strategy is to stay on the offense, is to keep them on the run. And to this end I want to thank you for supporting our Guard troops. Many of you have been overseas and have seen our Guard troops in action. And I can't thank you enough for not only supporting the troops in harm's way, but providing great comfort to their families, as well.

Ultimately, the defeat of the terrorists is not only defeat them overseas so we don't have to face them here at home, but as well, it's to spread liberty and freedom. And the freedom agenda is a powerful part of our country's desire to lay the foundation for peace. And it's making a difference. It's making a difference. I know one of the debates about the freedom agenda is, well, elections cause certain things to happen that you may not want to happen. No, elections are only the beginning of the process, they're not the end. Elections, plus a focused foreign policy effort that helps build the institutions of democracy, is what is going to be necessary to ultimately defeat the hateful ideology of those who would do our country harm.

It's an interesting debate that's going to take place here in Washington, or is taking place in Washington: Do elections cause radicalism or empower radicals? My answer is, the status quo empowered radicals. This notion that somehow the Middle East was a safe place for the last 30 years -- because we didn't see, kind of, the turmoil that happens with elections meant we were safe. I just totally disagree with that, kind of the -- beneath the surface that appeared placid, the policymakers, was resentment and hatred and planning and plotting, all of which came home on September the 11th.

And I believe this country has got to be aggressive in our pursuit of democracy and liberty, based upon our firm belief that there are such things as the natural rights of men and women. After all, that's what caused our founding, that there is universality to liberty. And we shouldn't be surprised when 11 million Iraqis go to the polls and demand freedom in the face of unbelievable terrorist attacks. That shouldn't surprise America. We ought to say we recognize that spirit, and it is that spirit that's ultimately going to be able to say we've kept the peace for our children and grandchildren.

And so we can work together on these important issues, and I thank you for giving me a chance for me to come by and visit with you about them. Thank you. (Applause.)