For Immediate Release
Office of the Vice President
February 24, 2006

Vice President's Remarks at a Presentation of the Distinguished Service Cross to Dr. Bernard Bail
The Roosevelt Room

THE VICE PRESIDENT: Good morning. In my years as Vice President, previously as Secretary of Defense, I've often had the honor of presenting awards for heroism in military action. Every such occasion is a special occasion and one to remember because it places me in the company of a brave American who elevated service to country above self-interest. 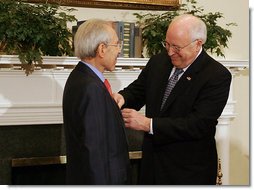 Today, however, is truly special: first, because the recipient is a hero of the Second World War, and part of the force that turned the tide against Hitler and began the liberation of Europe. Second, this moment is special because it was so very long delayed. As the citation indicates, First Lieutenant Bernard Bail, of the Army Air Corps, remained on board a damaged aircraft with the command pilot who was severely wounded and unable to follow the order to bail out.

Thanks to the aid he received from Lieutenant Bail, the command pilot, Lieutenant Colonel Leon Vance, was able to regain control of the aircraft to prevent it from crashing into an English village, and to ditch the aircraft and its ordnance in the English Channel.

More than six decades have passed since those events. Today, our nation makes official the distinction that Bernard Bail earned on June 5, 1944. Dr. Bail, if the Distinguished Service Cross in your case had been awarded in a timely fashion, you would have received it not from me, but from Vice President Henry Wallace. So I count it a privilege to make this presentation. I do so on behalf of the President and a grateful nation. From the day of our founding, the decisive protector of this nation's freedom has been the character of citizens like you.

THE VICE PRESIDENT: And now if we'll have the citation read.

(The citation is read.)

THE VICE PRESIDENT: Thank you all very much. 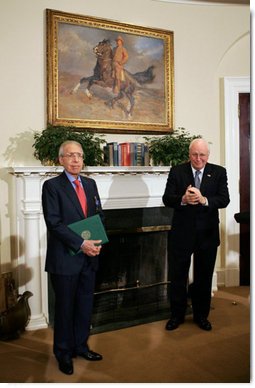