For Immediate Release
Office of the Press Secretary
February 23, 2006 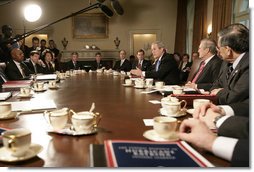 I reminded our Cabinet that hurricane season begins in June and that we will be tracking the implementations of the recommendations in this report. I want to thank her for her report. It's a good work. We will learn from the lessons of the past to better protect the American people.

We have made a strong commitment to people in the Gulf Coast and we will honor that commitment, as well. The report helps us anticipate how to better respond to future disasters. In the meantime, our commitment to rebuild and help rebuild Mississippi and Louisiana is ongoing and robust.

I'll be glad to answer some questions. Terry. Two questions. You're the first questioner.

Q Mr. President, dozens of Sunni mosques have been attacked and scores of people have been killed after the bombing of the Golden Mosque. How serious is the danger of a civil war in Iraq?

THE PRESIDENT: First of all, the people of the United States strongly condemn the destruction of the Golden Mosque. We believe in freedom to worship. And I understand the consternation and concern of Iraqi Shias when they see this most holy site wantonly destroyed.

I appreciate very much the leaders from all aspects of Iraqi society that have stood up and urged for there to be calm. They recognize two things -- one, the Iraqi people want to live in a democracy. After all, 11 million people voted in the last election. In other words, given a choice of whether or not they want democracy or a different form of government, millions of people showed up to vote, making a clear statement to the Iraqi authorities, as well as to the people of the world they want democracy.

Secondly, the voices of reason want all aspects of Iraqi life -- understand that this bombing is intended to create civil strife, that the act was a evil act. The destruction of a holy site is a political act intending to create strife. And so I'm pleased with the voices of reason that have spoken out. And we will continue to work with those voices of reason to enable Iraq to continue on the path of a democracy that unites people and doesn't divide them.

Finally, I do want to assure the Iraqi people that the U.S. government is serious in our commitment in helping to rebuild that holy site. We understand its importance to Iraqi society and we want to stand side-by-side with the government in making sure that beautiful dome is restored. 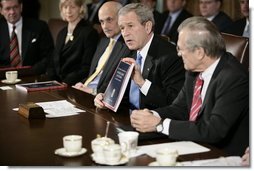 Q Sir, do you wish you had known earlier about the Dubai Ports deal and were you surprised by the controversy over it?

THE PRESIDENT: The more people learn about the transaction that has been scrutinized and approved by my government, the more they'll be comforted that our ports will be secure. Port security in the United States will be run by Customs -- U.S. Customs -- and the United States Coast Guard. The management of some ports, which, heretofore, has been managed by a foreign company will be managed by another company from a foreign land. And so people don't need to worry about security. This deal wouldn't go forward if we were concerned about the security for the United States of America.

And again, I repeat to the American people, this wouldn't be going forward if we weren't certain that our ports would be secure. But I also want to remind folks that it's really important we not send mixed messages to friends and allies around the world as we combine -- put together a coalition to fight this war on terror.

And so we'll continue to talk to people in Congress and explain clearly why the decision was made. Many of those doing the explanations are around this table, and I want to thank them for bringing a sense of calm to this issue, as people understand the logic of the decision.