For Immediate Release
Office of the Press Secretary
February 22, 2006

THE PRESIDENT: Welcome. Please be seated. Thanks for coming. Welcome to the White House. So glad you could join us for the 80th celebration of America -- African American History Month. We're here today to mark the achievements of African Americans in our country's history and to honor the contributions so many African Americans are making to our land today. 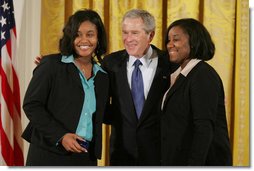 I want to thank the other members of my administration who have joined us. I particularly want to pay my respects to Dr. Dorothy Height, President Emeritus and founder -- (Applause.)

I couldn't help but noticing A.C. Green. (Laughter.) Thanks, A.C., for setting such a good example and using your position to help others. It's an honor you're here, really appreciate you coming.

This month we gather to honor the generations of heroes who called on our nation to live up to its founding promise of equality -- people like Dorothy Height. The past year we lost two of these heroes, women whose grace and determination helped change the path of American history -- Rosa Parks and Coretta Scott King.

Mrs. Parks helped set in motion a national movement for equality and freedom when she refused a bus driver's order to give her seat to a white man. Mrs. King spent her life advancing the cause of civil rights for all Americans. The courage and the dignity of these women helped rouse the conscience of a complacent nation. And we will continue to work to make the America these women fought for uphold the promise to all.

The reason to honor these women is to pay homage to their character and their strength, and to remember the ideal of active citizenship. In the 1960s, many active citizens struggled hard to convince Congress to pass civil rights legislation that ensured the rights of all -- including the right to vote. That victory was a milestone in the history of civil rights. Congress must act to renew the Voting Rights Act of 1965. (Applause.)

When African American History Month began eight decades ago, it was based on the belief that if African Americans were to take their rightful place in American society, Americans of all races should learn about black contributions to our history. That conviction is every bit at true today as it was in 1926. Generations of African Americans have added to the unique character of our society. Our nation is stronger and more hopeful as a result of those contributions.

America is a better place because of African American writers like Langston Hughes, Zora Neale Hurston, and W.E.B. du Bois. Our culture is richer, thanks to the talents of musicians like Nat King Cole, Lena Horne, and Dizzy Gillespie. We've been inspired by the achievements of African American scientists like George Washington Carver, and baseball stars like Jackie Robinson. Our nation is stronger because of the distinguished leadership of those like Supreme Court Justice Thurgood Marshall, and our two most recent Secretaries of State, Colin Powell and Condoleezza Rice. Thanks to the contributions of these leaders and many others, our nation has made great progress toward racial equality, yet we've got to remember there is still more work to be done. (Applause.) 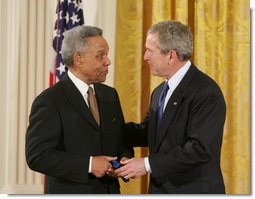 As we honor the achievements of black Americans across our land, we will keep striving to build an America where the dignity of every person is respected, where people are judged by the content of their character, and where the hope of the American Dream reaches every neighborhood and every citizen.

To ensure the promise of America reaches all our citizens, we have got to make sure that every child receives a quality education. (Applause.) The reason I worked so hard for the No Child Left Behind Act is because I believe that every child can learn, and I refuse to accept a school system that doesn't teach every child. And so we've raised the standards, and we measure. You cannot solve a problem unless you measure, and when we detect problems, we solve them early, before it's too late.

The No Child Left Behind Act is challenging the soft bigotry of low expectations, and it's having a positive result. Because we measure, because we hold people to account, we know this: that the most recent results of our nation's report card show African American children are closing an achievement gap. And it's an achievement gap we must close if the promise of this country is going to reach every neighborhood.

One way to ensure the promise of America reaches all of our citizens is to encourage ownership. We want people owning something. One way to help people realize their dreams is to encourage African Americans to own their own businesses. Last year, the Small Business Administration increased the number of loans to African American businesses by 42 percent. We're going to continue encouraging entrepreneurship throughout our country. Minority businesses are getting a better chance to compete for federal contracts. More African Americans than ever before own their own businesses, and that's a hopeful statistic and an important signal that the American Dream is reaching beyond certain segments of our society. 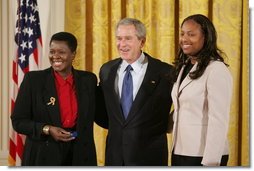 Part of ownership is for people to own their own homes. I love the idea when somebody opens up the door of their house and says, welcome to my home, welcome to my piece of property. In 2002, Alphonso and I set a goal of having 5.5 million new minority homeowners by the end of the decade. Since we set that goal, the number of minority homeowners has increased by 2.6 million. We're on track to reach our goal. Minority home ownership in the United States of America is at an all-time high.

As we celebrate African American History Month, we remember and thank the many African Americans who are defending our ideals as members of the United States Armed Forces, some of whom are with us here today. (Applause.) I thank these courageous men and women who are risking lives to protect us, to preserve our liberty by bringing the promise of freedom to millions across the world. They are laying the foundation of peace for generations to come. God bless. (Applause.)

So this is a value that we all share, and today, I am proud to recognize five citizens who are setting an example for all our fellow citizens. The President's Volunteer Service Award is the highest level of commendation a President can give in recognition of those who have contributed their time and their talent and their energy to helping others.

Today, we honor five such souls who are working to improve their communities and help their fellow citizens. Each of them has heard a call to serve something greater than themselves. By answering that call, you are inspiring others to do the same.

The volunteers we recognize today are Carl Anderson from Washington, Karl'Nequa and Katie Ball from Jackson, Mississippi, Steve Ellis from the great state of Texas -- (laughter) -- and Joan Thomas from Smyrna, Georgia. Their efforts are helping to provide role models and mentors to inner-city girls, to encouraging youth volunteers to work with people with -- with disabilities, to provide computer skills, training in local schools and community centers, and providing college scholarships to underprivileged children.

Today, we honor your service. We appreciate what you have done to lift the spirit of the country. We thank you for loving a neighbor just like you would like to be loved yourself. And I join all Americans in congratulating you and wishing you continued success.

And now, Commanders, if you all would read the citations.

(The citations are read.)

That's it. Thanks for coming. God bless. (Laughter.) Appreciate you all. (Applause.)