For Immediate Release
Office of the Press Secretary
February 21, 2006

Fact Sheet: The CFIUS Process And The DP World Transaction

The National Strategy for Maritime Security

THE PRESIDENT: I've just come back from a really good trip to the Midwest and the West talking about our need to change how we use energy -- very encouraged by the technology that I saw and inspired by the scientists and engineers that are working on these new technologies.

And I also want to address another issue I just talked to the press about on Air Force One, and that is this issue of a company out of the UAE purchasing the right to manage some ports in the United States from a British company. First of all, this is a private transaction. But it -- according to law, the government is required to make sure this transaction does not, in any way, jeopardize the security of the country. And so people responsible in our government have reviewed this transaction. 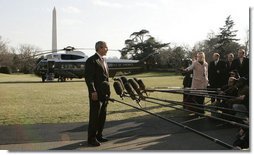 I think it sends a terrible signal to friends around the world that it's okay for a company from one country to manage the port, but not a country that plays by the rules and has got a good track record from another part of the world can't manage the port.

And so, look, I can understand why some in Congress have raised questions about whether or not our country will be less secure as a result of this transaction. But they need to know that our government has looked at this issue and looked at it carefully. Again, I repeat, if there was any question as to whether or not this country would be less safe as a result of the transaction, it wouldn't go forward. But I also want to repeat something again, and that is, this is a company that has played by the rules, that has been cooperative with the United States, a country that's an ally in the war on terror, and it would send a terrible signal to friends and allies not to let this transaction go through.

I want to thank you for your interest in the subject.