For Immediate Release
Office of the Press Secretary
February 16, 2006

PRESIDENT BUSH: Thank you all for coming. The President and I will make a statement. We'll be glad to take two questions per side.

First of all, the President and I are friends, and we are personal friends and we're friends of freedom, as well. Every time I visit with President Uribe I am impressed by his strength of character and his belief in the future of his country. Mr. President, I'm proud that you're here. I want to thank you for the wide-ranging discussions we have had. 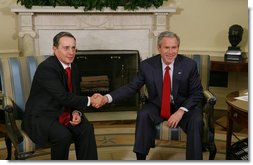 The President, of course, has got trade on his mind. I've explained to him very carefully that we are interested in a trade agreement that we will negotiate in good faith -- the agreement must be good for the people of Colombia, as well as the people of the United States. And I assured him that our trade negotiators will be fair in our approach.

We have been negotiating an FTA for the last 23 months. All of us have come to this negotiation in good faith and I'm sure that we will see a conclusion. This meeting has been good for democracy and it has been good for the interests of our people, as well as for our shared war on terror and our war against the drugs that finance that terror.

PRESIDENT BUSH: I understood you. (Laughter.)

Q Yes, Mr. President, do you feel it was appropriate that the Vice President didn't reveal his shooting accident until the next day, and through a private citizen? And do you think it was okay that he didn't talk to you about it, personally, until Monday?

PRESIDENT BUSH: I thought the Vice President handled the issue just fine. He went through -- and I thought his explanation yesterday was a powerful explanation. This is a man who likes the outdoors and he likes to hunt. And he heard a bird flush and he turned and pulled the trigger and saw his friend get wounded. And it was a deeply traumatic moment for him, and obviously for the -- it was a tragic moment for Harry Whittington.

And so I thought his explanation yesterday was a very strong and powerful explanation, and I'm satisfied with the explanation he gave.

Q But are you satisfied about the timing?

PRESIDENT BUSH: I'm satisfied with the explanation he gave.

Mr. President is about to ask somebody to ask a question.

Q Mr. President, is there going to be a free trade agreement with Colombia, or not?

PRESIDENT BUSH: Vamos a ver. I spent time visiting with the President about the progress on negotiations. Free trade agreements are never easy to negotiate -- es muy dif cile -- and because there's interests. He represents the people of your country very well. He's a good negotiator, as is his trade minister. They're strong in representing in representing the interests of the people, whether they be farmers or manufacturers. And our people are good, strong negotiators, too.

Q Some Democrats say that this shooting episode has contributed to a perception of White House secrecy. What do you say to that, sir?

PRESIDENT BUSH: I think people are making the wrong conclusion about a tragic accident. The Vice President was involved in a terrible accident and it profoundly affected him. Yesterday when he was here in the Oval Office I saw the deep concern he had about a person who he wounded. And he -- again, I thought yesterday's explanation was a very strong and important explanation to make to the American people.

And now our concerns are directed toward the recovery of our friend. I knew Harry Whittington when I was the governor of Texas, down there in Austin. He's a fine man. He's been involved in our state's politics for a long period of time. And, you know, my concern is for Harry, and I know the Vice President feels the same way.

Q President Bush, do you think the negotiators are making the link between the fact that it's important to prove legal economy as a way to fight against terror and illegal drugs?

PRESIDENT BUSH: That's a great question. I believe that when we work together in a free trade, it strengthens markets and the appreciation for open markets, whether it be in Colombia or here at home. I believe free commerce between nations will enable countries -- people in countries to realize their full potential. I think one of the things that's very important, I know the President is dedicated on, is a strategy on the one hand that says he will deal harshly with those who deal in drugs; but he also recognizes there needs to be economic activity to compete.

We've had a lot of discussions about crop substitution and micro loans for people to be able to develop ways to make a living that is distinct from and different from being involved in the drug trade.

And so absolutely we understand the connection between trade of legal products in a free way between nations as a way to compete against illegal activities. I appreciate the President's leadership on working hard to make sure that Colombia is rid of narco trafficking. It's a great country, with a wonderful history. And the determination to rid the country of narco trafficking will go down as a very important part of your nation's history and we'll continue to say that Colombia is a great country with great enterprise and great hope and great opportunity.

So thank you for coming. Adios.