For Immediate Release
Office of the Press Secretary
February 14, 2006

THE PRESIDENT: Please be seated, except for you guys up there. (Laughter.) Welcome to the White House. January 4, 2006, is a day that a lot of Texas fans will never forget. (Applause.) I called one of those Texas fans, who shall remain anonymous. I said, "How was it?" He said, "That game was the greatest day in my life." (Laughter.) I said, "Well, how about your wedding?" (Laughter.) He said, "Yes, that too." (Laughter.) 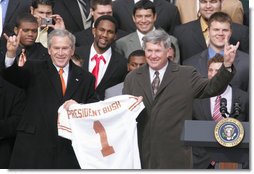 I want to welcome Mack and Sally Brown here. Congratulations, Coach, for doing something that -- (applause) -- leading this group of great athletes to a victory that made a lot of Texans proud. I know you made a person you admire proud, and a fellow I wish were here today, but he's not, and that's Coach Darrell Royal. (Applause.) We send Coach Royal -- we send him our very best, and you're following in his footsteps. You know, you've learned something about the press, in all due respect to those that are here -- (laughter) -- they tend to underestimate people sometimes -- (laughter) -- because I remember they started calling you "Mr. February". Well, today, Mack, you're giving February -- the title "Mr. February" a whole new meaning. This February you brought the national champs to the White House. (Applause.)

As you can see, you've brought out a lot of folks here to the South Lawn. We've never had quite a celebration this big here, and it's because there's a lot of Texas fans living here in Washington. But we've got some of the university officials with us. Mr. President, Bill Powers, it's good to see you, sir. I appreciate you coming, and your wife, Kim. It's good to see Mark Yudof and Judy, as well as Samara. It's good to see you all again. I see the members of the Board of Regents, James Huffines and Rita Clements, and other members of the board. Thank you for being here. DeLoss Dodds, I appreciate you doing a fine -- (applause) -- there he is. Hi, DeLoss. (Applause.)

I want to congratulate the coaching staff. One of the members of the staff has had an influence on my life. I might ask him to come up here. (Applause.) Mad Dog. My body is what it is today because of Mad Dog. (Laughter.) I appreciate you. He told me once -- he said, "If you ever make it to Washington, I promise you, Mr. President-to-be, I'm coming up there with a team of champions." And he did. Congratulations. (Applause.) I didn't know you owned a suit. (Laughter.)

MR. MADDEN: I had to get one made.

THE PRESIDENT: I didn't know they had one big enough. (Laughter.) 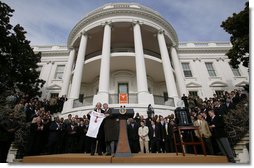 Mack can tell you what it takes to win, but one thing it takes is a team of great athletes playing together. That's how you win national championships. I suspect it's the difference between showing up and, you know, winning all but two and showing up and winning them all, is that people figured out how to put something greater than themselves on the line -- in this case, the University of Texas football team. This was a team that -- great power, great finesse. They were real quick.

But the thing that impressed me about the team -- you know, we can follow you here in Washington, D.C. just as well as we can follow you in Crawford -- is that this team never seemed that they never figured out the word "lose," it never entered their vocabulary. Every time they walked on the field you knew they were going to win. And perhaps one of the reasons why is because they are winners off the field, as well.

I'm impressed by Ahmard Hall, who's the fullback. (Applause.) Where is Ahmard? There he is. I don't know if you know this or not, but he was a United States Marine. Once a Marine, always a Marine. (Applause.) He served in Afghanistan and Kosovo. He entered the University of Texas on the GI bill. He's not only a fine blocker -- you need to get him to Baltimore -- (laughter) -- he started something called "Mamma Bear Cares," which sends packages to our troops overseas. Congratulations on being a great player, but, more importantly, a great citizen. (Applause.)

Mike Garcia is with us. Where's Mike? There he is. (Applause.) I'm glad we're on the same side. (Laughter.) Mike was involved in the Children's Miracle Network last spring. I take it you weren't a wide receiver. The point is, is that this guy was good in the trenches of football, and he's good in the trenches of life by supporting people who need our help.

We've got some other -- I don't know if you want to call them "big uglies" or not -- but Kasey Studdard and Neale Tweedie and David Thomas. (Applause.) Where are those guys? Come on up here. The reason these three guys are here -- Will Allen was supposed to be with them, but I think he missed the flight. Slept in. (Laughter.) Or study hall. (Laughter.) These fellas took time out of their lives to go to the Austin Children's Hospital to bring some joy into a kid's life. You might have frightened them when they first saw you. (Laughter.) But my point to you is that a championship football team is made up of people of character and decency. 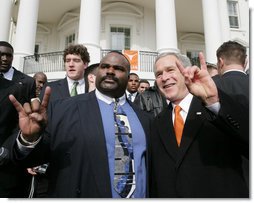 One final athlete I want to recognize is, of course, Vince Young, the great quarterback who -- (applause.)

THE PRESIDENT: Oh, that's all right, he doesn't need a suit. (Laughter.)

MR. BROWN: He was supposed to bring it -- forgot.

THE PRESIDENT: Yes, you can borrow a tie. (Laughter and applause.) I think Vince will tell you that the reason he -- the reason he got to where he is today is because of his teammates. One reason why Vince got to where he is, as well, is because he understands that the role of a star is to put something back in the community into which you were raised. I was impressed by his being involved in a program called LEAP, which means, "learn, enjoy and play." It's basically a chance for somebody like Vince to go in and say to some other -- to a young child, here's what it takes to succeed in life. It's called mentoring. And all these athletes, whether they know it or not, are mentoring by the way they behave, by the example they set for young kids all across Texas and all across the country.

I want to congratulate Coach and Sally for setting the examples they've set for these players. They're instrumental in what's called the Rise School in Austin. It's a school that helps infants and toddlers and preschool children with developmental disabilities. They're very much involved with the Capital Campaign for Helping Hands in Austin. They, like these players, are good citizens.

I also want to say congratulations to the coach for not only being a good -- having a good football team, being able to raise these young men to butt heads harder than the other ones around the country, but nearly half the team earned a spot on the UT athletic director's honor roll for posting a 3.0 grade point average last fall. (Applause.)

This team won a lot of football games and won the national championship, but of the 32 seniors on the team, 28 will have earned their degrees by the end of this summer, and one of those, who hasn't quite earned it yet, made a promise to his mother. And Vince, I'd suggest you honor that promise to your mother -- (laughter) -- and get your degree by the end of this summer, which I know he will.

All in all, we're honored to have a great group of individuals, people who brought great pride to our state, and pride to a great university. Welcome to Washington. Congratulations to the national champs, the University of Texas. (Applause.)