THE PRESIDENT: Thanks and welcome to the White House. It is an honor to be in the company of so many bright and distinguished Americans. Each of our honorees has been blessed with talent, and each has used their talent to the fullest.

The work we honor today has improved the lives of people everywhere. It has helped to move our economy forward and it's helped to make sure that America is the leader of innovation in our world. The medals are our nation's way of expressing gratitude to gifted and visionary citizens. I also appreciate the family members and friends who are here, as well. 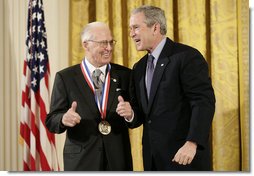 I thank Dr. Bill Jeffrey who is with us, Director of the National Institute of Standards and Technology. I want to thank the previous recipients of the National Medals of Science and Technology who've joined us. I thank my friends, Congressman Sherry Boehlert, as well as Dave Reichert, of the United States Congress, for being here. Thank you both for coming.

Most of all, thank you all for joining us.

The medals I'm about to present are the highest award a President can bestow for astounding achievement in science and technology. They recognize work that has helped expand the horizons of human knowledge. The National Medal of Science honors those whose research has enhanced our understanding of life and the world around us. And the National Medal of Technology recognizes innovators whose work keeps America on the cutting edge with discoveries that change the way we live.

The spirit of discovery is one of our national strengths. Our greatest resource has always been the educated, hardworking, ambitious people who call this country their home. From Thomas Edison's light bulb, to Robert Ledley's CAT scan machine, most of America's revolutionary inventions began with men and women with the vision to see beyond what is, and the desire to pursue what might be. 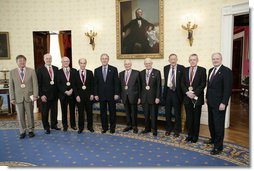 Many technologies that are in our laboratories today will bring cures and technologies that are beyond our imagination. And we will then wonder how we ever lived without them. These kinds of changes are the result of years of hard work by American innovators, like those we honor here today.

Over the years, National Science and Technology laureates have been responsible for breakthroughs that revolutionized telecommunications, discovered the structure of DNA, led to the invention of the microchip. These laureates have done work that have revolutionized organ transplants and led to development of global positioning systems and helped feed millions around the world.

Our nation has a vital stake in the research and discovery that makes these advances possible. And so in my State of the Union I encouraged our nation to stay on the leading edge of technology and education. I've talked about an American Competitiveness Initiative that will double over the next 10 years the federal commitment to the most critical, basic research programs in the physical sciences. I think that's a good use of taxpayers' money. (Applause.)

Six of today's eight science laureates have benefited from past investment in this kind of research. If we want this country to be the most competitive country in the world, we have got to spend money now to make sure we stay on the leading edge of technological change. We've also got to recognize it's in the private sector where most money is spent on research and development, yet we unwisely have allowed the research and development tax credit to expire. If the United States expects to remain competitive in a global economy, we must encourage our private sector to continue to invest in leading-edge technologies, and therefore, we ought to make the research and development tax credit a permanent part of our tax code. (Applause.)

We can't be the leading country in the world in science and technology unless we educate scientists and young mathematicians. And so as part of the Competitive Initiative I'm going to work with the Congress to make sure we extend the same standards in the No Child Left Behind Act that we apply to reading and math. The facts are that we're doing fine with 4th grade kids in math and science. The facts also are these, that we're falling off the face of the charts when it comes to 8th grade math. And we've got to change that. And one of the sure ways to change that is to apply special money for kids who need extra help in junior high for math and science. 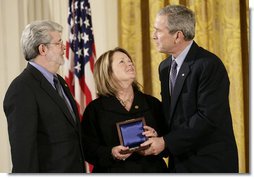 We can't make sure our children have got math and science -- fine math and science courses unless we've got teachers capable of teaching math and science. And one way to do that is to expand education to high school teachers in how to teach advanced placement. Advanced placement programs work. They make a significant difference in the lives of our children. And so by making sure more teachers can teach AP, this country will be better off in making sure that we've got the future scientists and mathematicians living right here in the United States of America.

Another part of the initiative is to encourage school districts to recruit 30,000 math and science professionals to teach in our nation's classrooms. I mean, we want young kids to think math and science -- math and science are cool subjects, that it's okay to be a mathematician, that it's exciting to be a scientist. And there's no better way to make sure that young students are encouraged to take math and science than to have successful scientists explain to our students just the wonders of exploration.

You know, I was out in Albuquerque and had a good visit in Intel. They've got an interesting program. They provide incentives for their employees to go into the classrooms of local high schools and community colleges to say to youngsters, join us in these exciting fields. And the exciting jobs of the 21st century are going to be in math and science. And the American people must understand that if we don't educate our kids in math and science, the jobs are going to go elsewhere in the years to come. The Competitive Initiative recognizes we're great when it comes to research and development, and we intend to stay that way. But we've also got to be great when it comes to making sure our students have got the skills necessary to compete in the 21st century.

I appreciate the work that today's laureates are doing to inspire young scientists. We've got some young scientists from Benjamin Banneker High School with us. Thank you all for joining us. I appreciate you being here. I hope that you are inspired by the examples of excellence and success that you see right here in this ceremony today. 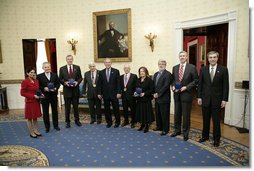 You know, it's interesting, people generally do not pursue a career in science or technology with the goal of fame. I'm kind of trying to change that today. (Laughter.) The work of discovery is quiet and often solitary. Yet, all Americans benefit from your imagination and your talent and your resolve. And so today we're here to say thanks for what you've done; thanks for helping improve the quality of life in this country; thanks for inspiring others. Congratulations on your medals, and now the military aide will read the citations. (Applause.)

(The medals are presented.)

THE PRESIDENT: Again, thank you for coming. Got a little reception back here for the honorees and their families. I'm proud to have you here in the White House. May God continue to bless our great nation. Thank you. (Applause.)