THE PRESIDENT: Welcome. Thank you. Be seated. They may be playing basketball, but it's always baseball season here. (Laughter.)

The last time the Chicago White Sox won the World Series was 1917. President Woodrow Wilson was living here. Reinsdorf, I don't know if you came here then or not. (Laughter.) There were only eight teams in the American League, and the league leader hit a total of nine home runs. After 88 years of waiting, the White Sox have earned the right to be called world champs, and we're glad you're here. (Applause.) 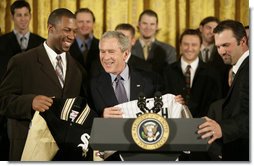 First of all, I want to welcome Jerry Reinsdorf. Some of my most joyous times in my life have been during -- as a baseball owner. Harold Baines may not have thought they were so joyous, since we never won much. (Laughter.) And one of the reasons that I ended up in baseball with my partner is because of Jerry Reisndorf's help, and I want to thank you for that now that we've got the team here. I know how much you love the game, and I know how much you love the Chicago White Sox. And so it had to be a thrilling moment for you and Eddie and the owners that were -- that were patient for all those years you didn't win. And so I congratulate you from the bottom of my heart, and thank you for your friendship. It's great to see you.

I appreciate Ken Williams, a man who obviously knows what he's doing who is -- was able to put a team together. It's easy to put stars on the field. The hard thing about baseball is to put people who can play together, and I congratulate you for being a great general manager.

I welcome Ed Farmer and the broadcasting team. Eddie, good to see you again. (Applause.) Thanks. I can see they'll remember you -- at least one person does. (Laughter and applause.)

It's good to be here with Bob DuPuy of baseball. I thought you're here to sign the lease, you know, but it's -- (laughter) -- another subject.

I do want to thank the members of my Cabinet who are here. It's great to see you all. I thought you all told me you were Red Sox fans. (Laughter.)

I want to thank Senator Durbin and Senator Obama from the great state of Illinois, and Don Manzullo and Roy LaHood -- Ray LaHood. Thank you all for coming.

I -- my question to most of these folks was, like, were you White Sox fans at the beginning of the season? (Laughter.)

AUDIENCE MEMBER: Yes, he puts us on the spot.

Roland Hemond, good to see you, Roland. Thank you. Just showing off my baseball knowledge. Anybody that knows -- (laughter) -- knows Roland Hemond knows something about baseball. And it's good to see Harold Baines and the other coaches. 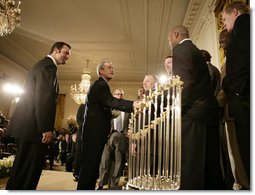 I understand Ozzie is on vacation, which I fully understand. If he's a Caribbean guy, taking a look at the weather forecast up here yesterday would have made me not want to come, as well. (Laughter.) But I want to congratulate Ozzie Guillen, as well as the team and staff, the coaching staff, and the managers and all those who worked hard to make these guys ready to play. And I want to congratulate Ozzie on being a great manager, manager of the year, as well as becoming a United States citizen earlier this year. We're proud to have him as an American citizen.

THE PRESIDENT: I won't. (Laughter). But it's great to see you. Harold Baines is one class act. I mean, that guy can not only hit, but he brought a lot of class into the clubhouse, and I'm really proud to see you here, Harold. Congratulations to you and the buddies you're working with.

The amazing thing about this team is you went wire to wire, which is really hard to do. You win one-nothing on opening day, and like, they're in your rear-view mirror for the rest of the season. It takes a lot to win 99 games and to remain the lead and not falter. And it says something about the character of the team that you put together and the character of the players.

I got a first-hand report from the World Series from two people I love dearly who had actually front-row seats, and that would be my mother and father. (Laughter.) I'm not going to tell you who they were rooting for, but it didn't have much effect on the outcome of the series, I'll put it to you that way. (Laughter.)

I was impressed as a baseball guy -- at least somebody who follows it still, closely -- that you had four complete games in a row in the playoffs. That's a good strategy, Jerry, to keep the bullpen -- (laughter) -- keep the bullpen fresh. (Laughter.)

You know, there was great players, but nobody off the chart, if you know what I mean, which means you competed as a team. Jermaine Dye had an interesting quote, that I think is worth sharing with people who are paying attention at this moment. He said, "From the start of spring training, everybody was hungry." He didn't say one player was hungry or a guy going into arbitration was hungry, or a free agent for next year was hungry. He said everybody was hungry. They're -- everybody wanted to go out there and win together. Everybody was pulling on the same rope. That's why you're the world champs. Everybody was pulling on the same rope. And that's what we're here to honor, a great championship team.

I know the affect you had on White Sox fans, and it must have been electrifying. One women in her 90s said, "I've been a Sox fan all my life, I never thought I'd live to see the day." Think about that -- think about the joy that you all put in the hearts of this 90-year-old person, and probably some young ones, too, that were pulling for the White Sox.

The people of Chicago turned out en masse not only because you were baseball champs, but because you have brought some character to the city. I want to applaud the organization for supporting inner-city Little League. I think it's really important for this great state of baseball to reach out to people of all walks of life to make sure that the sport is inclusive. The best way to do it is to convince little kids how to -- the beauty of playing baseball.

I appreciate the baseball fields you're building in Chicago, kind of little centers of hope, little diamonds of joy for people to come and be able to play the greatest game ever invented. I appreciate the Chicago White Sox Charities, your support of cancer research and cancer treatment in the metropolitan area. Most of all, I appreciate the fact that these players understand they're setting examples for young boys and girls all across Chicago, as well as the country. You're setting the example that serving something greater than yourself is important in life; coming together as a team is a heck of a lot more important and satisfying than worrying about your own batting average or your own ERA.

And so here we are in the White House, Jerry, honoring the great Chicago White Sox. I'm proud to be with you. God bless your championship and God continue to bless the country. (Applause.)

MR. KONERKO: Mr. President, on behalf of our organization, and all the fans on the South Side and all over the world, we want to present you with this jersey and jacket.

THE PRESIDENT: I thought you were going to give me a loan. (Laughter.)

MR. DYE: And also, we know deep down you probably wish this was a Houston Astros jacket. (Laughter.)

THE PRESIDENT: Now wait a minute --

MR. DYE: Hopefully this will do.

MR. KONERKO: Thanks for having us here today.

THE PRESIDENT: Actually it was a Texas Rangers jacket. (Laughter and applause.)