PRESIDENT BUSH: Mr. Secretary General, thank you. As usual, we had a very constructive dialogue. I always enjoy visiting with the Secretary General. It gives us a chance to talk about our common interests and our desire for peace and liberty around the world. 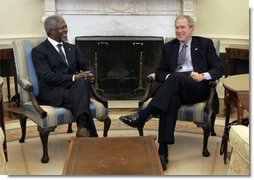 We talked about the broader Middle East. And there's a lot to talk about. I am very optimistic, however, that democracy and liberty will prevail. And so I want to thank you for your interest and leadership on those particular issues.

We talked about U.N. reform, structural reform, management reform, as well as the reform of the Human Rights Commission. I was most interested in the Secretary General's thoughts. I appreciate very much his leading on these issues, and we'll continue to work closely through Secretary Bolton -- Ambassador Bolton, with the Security Council and the United Nations.

So Mr. Secretary General, thanks for coming. It's always a pleasure to welcome you here to the Oval Office. The floor is yours.

SECRETARY GENERAL ANNAN: Thank you very much, Mr. President. I also enjoy our periodic exchanges, and I'm very happy that we have agreed to work together on the Darfur issue, working with other governments from Europe, from Asia, and other regions, to ensure that we do have an effective security presence on the ground to protect the IDPs and ensure that humanitarian workers have access to those in need. And of course this is an issue where all governments have to play their role.

On security -- on the U.N. reform and Human Rights Council, I think the President and I agree that we need to reform the Human Rights Council and it should be done as soon as possible. The President of the General Assembly, Jan Eliasson, is working very hard to ensure that we will have that done by this month, and that when the Human Rights Commission meets in Geneva, it will be in the process of transformation, it will not be business as usual. And I also thanked the President for all the support he's given us on U.N. reform, on the broader U.N. reform. And there are quite a lot of things that we're going to do.

We also touched on the issue of the nuclear issue in -- of Iran. And here again, I hope between now and the time the Atomic Agency issues its next report, there will be indications and steps from the Iranian side to indicate that negotiations are not dead, and that both sides can come back to the table and find a way out of this crisis. We need to be able to resolve it, and I hope there will be no steps taken to escalate the situation.

PRESIDENT BUSH: I appreciate it. Thank you.