For Immediate Release
Office of the First Lady
February 10, 2006

MRS. BUSH: Thank you very much. I want everybody to know how excited we all are to be the delegation that gets to be at your Games, the 2006 Winter Olympics. It's such a thrill to be here.

So I brought a part of the delegation, a few former Olympians. You probably know some of them, but I'd like to introduce all of them to you. First, Dorothy Hamill. (Applause.) Dorothy won the gold medal in 1976 in Austria. Eric Heiden, who won five gold medals in speedskating in Lack Placid in 1980. (Applause.) And he's also working as the team doc for the speedskaters on this Olympics. Debi Thomas, who is a bronze medalist in figure skating. (Applause.) Debi, like Eric, is an orthopedic surgeon, two doctors, two former Olympians. Kerri Strug, who won the gold with our 1996 gymnastics team. (Applause.) And then somebody who is best known as a Dallas Cowboy, but he was also an Olympic bobsledder, Herschel Walker. (Applause.) 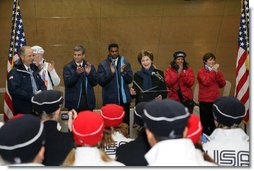 We're here to cheer you on and wish you the very best as you compete over the next two-and-a-half weeks. I know what an honor it is to be able to win a spot, earn a spot on the Olympic team. Your achievement is the culmination of years of hard work and sweat, over pain and sacrifice. And I want to congratulate each and every one of you, when you reach this moment where you wear the U.S. colors and compete with the best in the world.

You have a powerful platform here, to have the world see America in a positive light. You represent so much of what is great about our country. You represent our diversity, demonstrating that America is a rich tapestry of people from many different backgrounds and beliefs. You represent our dreams, the can-do conviction that in America, if you're willing to work hard and make sacrifices, to give your goal your all, you can succeed beyond what you might have ever imagined. And you represent our desire to engage with people from across the world in ways that are peaceful, and that challenge all of us to be the very best that we can be.

When you're gracious in victory or defeat, when you're respectful of athletes from other countries, when you listen and learn about other people's beliefs and cultures, you're serving not only your sport, but you're serving our country, as well. I hope that during your time here, each of you will think of yourselves as ambassadors for America. I know you'll make us proud; you've already made us proud. And there are many great moments ahead. When a medal is placed around your neck, when we watch the flag rise and we hear the national anthem, every single person in the United States will be so happy for you and sending you our very best.

I wish every one of you the very best in every sport, every game, every slalom, every turn of the ice. Americans will be watching with pride, and we look so forward to welcoming back a team full of champions. Good luck to you all, and God bless you.