For Immediate Release
Office of the First Lady
February 10, 2006

MRS. BUSH: Good morning, everybody. We're so happy to be here today. General Yates, Commander of the 31st Fighter Wing, thank you very much for your kind introduction. And thanks all, to every one of you, for your very warm welcome. I'm the one who should be applauding you. So thanks a lot. 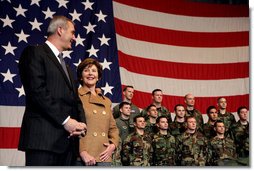 Each one of you, whether you serve in the military, or you support a family member who serves, makes a contribution to our country. You've earned the respect and the gratitude of the American people, including, and especially, your Commander-in-Chief. (Applause.)

Major General David Zabecki, Commander of Southern European Task Force, I want to acknowledge you; Colonel Robert Sardo, the Italian Air Force Commander. Colonel Sardo, President Bush and the people of the United States are very grateful for Italy's support and sacrifice in the war against terrorism. Thank you so much, Colonel Sardo. (Applause.)

I'm so happy to be in Italy. We're on our way, as you might guess, to Turin. We're the official delegation to the Olympic Games in Turin from the United States. Our Ambassador to Italy, Ronald Spogli, is a member of the delegation and he's here with us. And also, of course, and especially, our accomplished athletes, our former Olympians. And I just want to introduce them to you one more time.

Dorothy Hamill, who won the gold medal in figure skating in Austria in 1976. (Applause.) Dr. Eric Heiden, who won five gold medals in speedskating in front of the home crowd at Lake Placid in 1980. (Applause.) Dr. Heiden is now an orthopedic surgeon, as is Dr. Debi Thomas, a bronze medalist in figure skating from 1988. (Applause.) Kerri Strug, who won the gold with our 1996 gymnastics team, and who works for the U.S. Department of Justice. (Applause.) And of course, the one that everyone knows as a Dallas Cowboy, and you may -- (applause) -- but you may not know he competed as an Olympic bobsledder in 1992, Herschel Walker. (Applause.)

These athletes make America proud, and this year's U.S. Olympic athletes, who we'll watch for the next two weeks, will once again bring pride and honor to our nation. But I want you to know that the men and women of our armed forces bring the greatest pride and honor to our country. Throughout the challenges of the last four years, you've served with courage and distinction.

I visited Aviano, I spoke here in July 2001. Little did we know then what was ahead of us. Since then, of course, the world has changed. The attacks on America on September 11th reminded us that freedom is precious. We can never be complacent, as long as there are people who hate freedom and glorify violence. 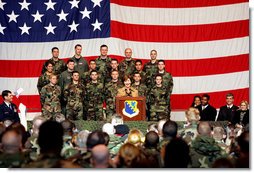 Defending America's freedom is the core mission of our military, and you're carrying out that mission. Many of you have already served in Iraq and Afghanistan. I just met earlier with the troops who had just returned home, three units from the 31st Fighter Wing. They engaged the enemy there, they delivered vital supplies, and they provided air support for troops on the ground, all to advance the cause of freedom.

Airmen and soldiers stationed at Aviano and Vicenza recently returned from their deployment to Operation Enduring Freedom in Afghanistan. There, they trained members of the Afghan National Guard who want to defend their own country, and they provided flood relief in Afghanistan and responded instantly to the devastating earthquake in Pakistan. People around the world see the face of the United States in the troops that helped rescue after the tsunami, who helicoptered people out of the devastation of the earthquake in Pakistan. Forces from Aviano continue to serve in the Balkans, supporting efforts there to maintain peace and stability.

People around the world see the true heart of America in our response to those who need, and in our defense of the oppressed. In Afghanistan and Iraq, 50 million people are free because of the response of the United States military and our allies.

Afghan men and women elected their governments, which represent all their people. The Afghan constitution guarantees the rights of all citizens, including women, to speak and worship freely. Children can once again enjoy simple pleasures like listening to music. Stadiums are used for sport, and not killing.

Thanks to your work, the quality of life in Afghanistan is improving. Provincial Reconstruction Teams have built hundreds of miles of roads and rebuilt hospitals and schools.

Last year I visited Afghanistan with the U.S.-Afghan Women's Council. One of the highlights of that trip was a meal shared with the men and women at Bagram Air Force Base. When my husband delivered his State of the Union address last week, a woman who serves in Afghanistan's parliament sat with me. Her father was a member of the last democratically elected parliament in Afghanistan more than 30 years ago. She represents the hope that all women and men have to participate in the life of their nation, and to make important contributions to the world.

The Iraqi people also look forward to a brighter future for themselves and their children. They want to live in a country that's free of tyranny, free of violence, and free of the destructive hatred of terrorists.

Iraqi men and women went to the polls three times last year. In December, voters elected the first government under Iraq's new constitution. Sunnis, Shiites and Kurds all participated in the election, and they'll work together to determine their country's future. We'll be partners with the new government, to help Iraq become secure and stable, and meet the needs of its citizens.

In the work ahead, of course we rely on the courageous men and women of our military. And our fellow citizens know that your work is not easy.

Many of you have faced long deployments, sometimes far longer than you expected. Many of you enlisted at a time of peace and now find yourselves serving in a time of war. You miss your families and you worry about them, and your families miss and worry about you. Some of you have lost friends, men and women you'll never forget. And America will never forget them, either. I'm grateful, and I know that all Americans are grateful, to live in a country that produces such brave men and women.

When loved ones are away, families at home need support. I've met with military husbands and wives and children, and I respect your courage and your resiliency. You make countless sacrifices to help your loved one fulfill their duty. You deal with the burdens of raising families on your own, and you worry about your husband or wife, or your mom or your dad, far from home. We'll never forget your commitment and the dedication you have to your loved ones.

Last year, 23,000 servicemen and women from all branches of the military passed through Aviano on their way to or from Iraq and Afghanistan. Operation Yellow Ribbon, run mainly by military spouses, gave each of those men and women the support to carry them through to the rest of their journey.

Whether you offered food, drinks, books, hugs, or simple smiles, all of your gestures showed someone who was scared or war weary that you cared.

As you're stationed here in Italy, you are never far from the minds of Americans back home. People in every town have yellow ribbons in their windows or on their cars, remembering the families defending freedom. Countless prayers are said for you, including at the White House. Packages and letters are sent to men and women serving around the world, bringing a touch of home and a word of thanks.

Today, the people of Iraq and Afghanistan are recovering from years of oppression while embracing the principles of democracy. You are the guides and the guardians for millions of men and women and children making their way toward a future of freedom.

Through the difficult days, I hope you'll draw strength from the knowledge that America honors your service and your sacrifice. We pray for your safety and swift return. We pray for your families. And we pray for an end to violence everywhere, so that future generations will grow up in a world at peace, a world that you shaped.

Thank you all very, very much. On behalf of President Bush and all Americans, God bless you, and may God bless the United States of America. (Applause.)

Thank you all very, very much.