For Immediate Release
Office of the First Lady
February 9, 2006

MRS. BUSH: I just was very, very privileged to have the chance to meet His Holy Father, the new Pope, Pope Benedict. And I had a chance to visit with him, to talk to him about what I'd seen in Nigeria, for instance, when I visited St. Mary's Hospital, all the good work that different Catholic charities and Catholic orders are doing around the world. St. Mary's is a partner with PEPFAR, the President's emergency relief for AIDS. And so they are one of our many, many partners around the world, partners with the United States government in ways to reach people where people are, to be able to make sure they get treatment for AIDS, they get tested for AIDS, they have the chance to go on antiretrovirals and live a normal life. 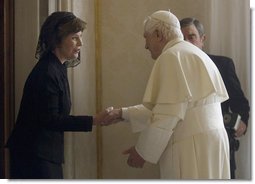 And so I was able to tell him about that opportunity that I'd had. And then, of course, he and I talked. He talked to me about the worries of terrorism, the worries right now of the violence in Beirut and Damascus and other cities; and his hope, and certainly our hope, for peace and for tolerance, for each of us to treat everyone else with respect.

So it was a huge privilege to have the chance to meet him and to bring the very best wishes of the people of the United States and of the President, of course, to him.

I don't know if many Americans know how very active the United States is in feeding people around the world, how important it is, that all of these food programs are, and how individuals themselves can donate to the World Food Program, for instance. It only costs about $30 to feed a child for a year. And that's very, very important. The World Food Program, besides having the contribution of governments from around the world, also has contributions from corporations, worldwide corporations, as well as American corporations and individuals, to reach people around the world.

They say there are about three to five million hungry children around the world, and there's a lot of things we know. We know that if there are school food programs, if children are fed in school, their parents will send them to school. And that's really important, for girls' education specifically, to make sure girls are educated, and while they're there, they're fed. 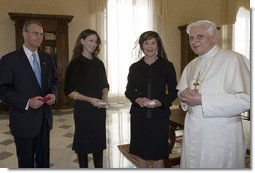 So it's important -- food programs are very important around the world, especially in the countries with high incidents of HIV/AIDS, so that people can be treated for AIDS, as well as nourished at the same time.

Q Mrs. Bush, in keeping with your call for peace around the world, do you think there's a justification for the passion and anger that Muslims feel over the cartoon depicting Mohammed?

MRS. BUSH: I know that Muslims are offended with these cartoons, and I understand their offense. On the other hand, I don't think violence is the answer. I think that everyone around the world needs to speak out and say let's stop the violence. It's really not necessary to get the point across that they were offended by those cartoons.

Q Did you and the Pope discuss that?

Q Do you think there's something the United States can do more to help bring down that level of violence that you discussed?

Q What do you think about Iran -- their government is now doing that holocaust editorial cartoon.

MRS. BUSH: Really it was just a general message of respect and best wishes from the President. And he said the same thing back, for me to give the President my very best wishes, and also his best wishes to the people of the United States.

Q Did you exchange gifts with him?

MRS. BUSH: He gave me a beautiful rosary, and I gave him a silver bowl from the President and me.