For Immediate Release
Office of the Press Secretary
February 9, 2006

PRESIDENT BUSH: Mr. President, welcome to the Oval Office. It's really good to have you here. We have just had a extensive discussion about important issues. After this press statement we'll go have lunch and continue our discussions. And we've got a lot to discuss, because we're strong allies and friends. We're friends in liberty. We believe in peace. 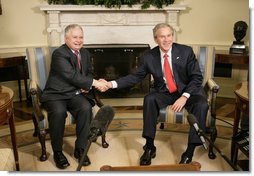 I told the President, it's amazing to be sitting with somebody who knows the difference between living in a society that is not independent, and not free, and one that -- and now he's the President of a free country. I thanked the President and the Polish people for their support of democracy movement in Iraq.

We had a very interesting discussion about NATO and the European Union. You can be an active member of the EU, a loyal member of the EU and a friend of the United States at the same time. I asked the President his advice on Ukraine. That's what friends do -- they share information and share strategic thoughts.

We talked about the importance for commercial ties. We'll continue those discussions over lunch. The President of Poland comes to a country that respects Poland. There's a lot of Polish-Americans that have still got great pride for the homeland. We congratulate you on your victory and welcome you.

PRESIDENT KACZYNSKI: President Bush has spoken of the subject of our talks. The first part has been extended, to a certain extent, and we will continue our discussions during lunch. We have discussed issues relating to NATO, the European Union, Belarus, Ukraine and Russia and Iraq and Afghanistan. In other words, to say very briefly, we've discussed all issues that both countries are interested in.

Mr. President and myself have discussed issues relating to freedom in the Ukraine and Belarus. And the support of the United States for all actions that are leading to freedom in Ukraine and Belarus are very important for Poland, at the same time. There have been certain signals that might lead to an improvement of relations between the Republic of Poland and the Russian Federation. We have no certainty yet, but these signals we have received, and we're hoping for an improvement in relations between Poland and Russia.

We shall continue our talks in a few minutes.