For Immediate Release
Office of the Press Secretary
February 7, 2006

THE PRESIDENT: To the King Family, distinguished guests and fellow citizens. We gather in God's house, in God's presence, to honor God's servant, Coretta Scott King. Her journey was long, and only briefly with a hand to hold. But now she leans on everlasting arms. I've come today to offer the sympathy of our entire nation at the passing of a woman who worked to make our nation whole. 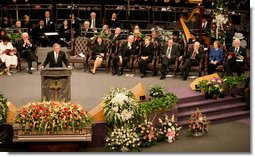 Americans knew her husband only as a young man. We knew Mrs. King in all the seasons of her life -- and there was grace and beauty in every season. As a great movement of history took shape, her dignity was a daily rebuke to the pettiness and cruelty of segregation. When she wore a veil at 40 years old, her dignity revealed the deepest trust in God and His purposes. In decades of prominence, her dignity drew others to the unfinished work of justice. In all her years, Coretta Scott King showed that a person of conviction and strength could also be a beautiful soul. This kind and gentle woman became one of the most admired Americans of our time. She is rightly mourned, and she is deeply missed.

Some here today knew her as a girl, and saw something very special long before a young preacher proposed. She once said, "Before I was a King, I was a Scott." And the Scotts were strong, and righteous, and brave in the face of wrong. Coretta eventually took on the duties of a pastor's wife, and a calling that reached far beyond the doors of the Dexter Avenue Baptist Church.

In that calling, Dr. King's family was subjected to vicious words, threatening calls in the night, and a bombing at their house. Coretta had every right to count the cost, and step back from the struggle. But she decided that her children needed more than a safe home -- they needed an America that upheld their equality, and wrote their rights into law. (Applause.) And because this young mother and father were not intimidated, millions of children they would never meet are now living in a better, more welcoming country. (Applause.)

In the critical hours of the civil rights movement, there were always men and women of conscience at the heart of the drama. They knew that old hatreds ran deep. They knew that nonviolence might be answered with violence. They knew that much established authority was against them. Yet they also knew that sheriffs and mayors and governors were not ultimately in control of events; that a greater authority was interested, and very much in charge. (Applause.)

The God of Moses was not neutral about their captivity. The God of Isaiah and the prophets was still impatient with injustice. And they knew that the Son of God would never leave them or forsake them. 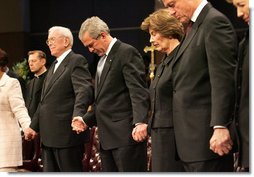 But some had to leave before their time -- and Dr. King left behind a grieving widow and little children. Rarely has so much been asked of a pastor's wife, and rarely has so much been taken away. Years later, Mrs. King recalled, "I would wake up in the morning, have my cry, then go in to them. The children saw me going forward." Martin Luther King, Jr. had preached that unmerited suffering could have redemptive power.

Little did he know that this great truth would be proven in the life of the person he loved the most. Others could cause her sorrow, but no one could make her bitter. By going forward with a strong and forgiving heart, Coretta Scott King not only secured her husband's legacy, she built her own. (Applause.) Having loved a leader, she became a leader. And when she spoke, America listened closely, because her voice carried the wisdom and goodness of a life well lived.

In that life, Coretta Scott King knew danger. She knew injustice. She knew sudden and terrible grief. She also knew that her Redeemer lives. She trusted in the name above every name. And today we trust that our sister Coretta is on the other shore -- at peace, at rest, at home. (Applause.) May God bless you, and may God bless our country. (Applause.)