For Immediate Release
Office of the Press Secretary
February 6, 2006

THE PRESIDENT: Thank you for the warm welcome here at the Federal Reserve. It is one of our government's most vital institutions. And today I congratulate a fine man and a distinguished public servant, Dr. Ben Bernanke, on becoming the 14th Chairman of the Federal Reserve. (Applause.)

It's good to be with Anna, Ben's wife, Alyssa and Joel, his sister Sharon, and the other members of the Bernanke family. Welcome. Thanks for being here. You probably didn't think your brother was going to amount to much. (Laughter.) 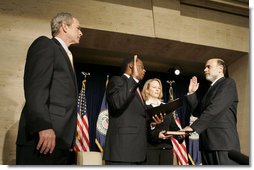 To members of my Cabinet who are here -- Secretary Carlos Gutierrez, Deputy Secretary Bob Kimmitt, members of Congress -- Congressman Oxley, Congressman Frank -- thank you all for coming. It's awfully generous of you both to be here. I appreciate Roger Ferguson, the Vice Chairman; other members of the Board of Governors, thank you for being here, as well. Former Chairman Paul Volcker, thanks for coming today, sir. I've got something to say about the other former Chairman who is here in a minute. (Laughter.)

Since its creation in 1913, the Federal Reserve has helped bring stability and growth to our nation's economy. Around the world the Fed is a symbol of integrity and reliability. Its decisions set our nation's monetary policy, ensure a sound banking system, and help contain the risks that can arrive in our financial markets. The Fed's actions touch the lives of all Americans, and the Chairman of the Federal Reserve must be a leader of unquestionable credentials, sound judgment and impeccable character. Ben Bernanke meets those high standards and he will be an outstanding Chairman of the Federal Reserve.

As Chairman, Ben follows in the footsteps of one of America's most respected public servants. Alan Greenspan is perhaps the only central banker ever to achieve what one publication called, "rock star status." (Laughter and applause.) For almost two decades, Chairman Greenspan's prudence and wise policies have guided this nation through major economic challenges, have kept inflation in check, and contributed to phenomenal economic growth and a better life for all our citizens.

Recently he said, "I have only just realized that I have been on 24-hour call for 18 years." Mr. Chairman, you can rest a little easier and know that a grateful nation thanks you for your extraordinary service. (Applause.)

Ben Bernanke now takes up Alan Greenspan's mantle. When I announced Ben's nomination last October economists and leaders across the political spectrum responded positively. They praised him for his unsurpassed academic credentials, broad policy experience and a reputation for consensus-building. The son of a pharmacist and a school teacher, Ben graduated from Harvard with top honors and earned a doctorate in economics from Massachusetts Institute of Technology. He rose through the academic ranks to become the chairman of the economics department at Princeton. 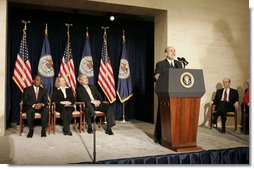 Ben is one of the most cited economists in the world, and is recognized for his path-breaking work in the field of monetary policy. Ben Bernanke also knows the Federal Reserve System. From 2002 to 2005, he served with distinction on the Fed's Board of Governors. Since last year he has served as the Chairman of the Council of Economic Advisers at the White House. I came to trust his judgment, his calm demeanor, and his sly sense of humor. (Laughter.)

Throughout his distinguished career, Ben has earned a reputation for intellectual rigor, integrity and personal decency. He's earned the respect of the global financial community. Ben is an economist's economist, one of the most esteemed leaders in the field. He understands that economics is more than just crunching numbers. Good economics embraces policies that unleash hope and hard work and the power of free people to be able to fashion and improve their lives. Ben Bernanke will work every day to keep America's economic prospects strong and prosperous. He'll be a superb chairman.

Mr. Chairman, thank you for agreeing to serve. Congratulations. (Applause.)

CHAIRMAN BERNANKE: Good morning. I'd like to begin by thanking President Bush for the confidence he's placed in me, and for his attending the ceremony. This is only the third visit of a President to this building. Franklin Roosevelt dedicated this building in 1937, and President Ford was here in 1975. Mr. President, you do us a great honor. Thank you.

Members of the President's economic team, and the heads of the federal financial regulatory agencies have also joined us this morning. I've greatly enjoyed collaborating with many of you in my time in Washington, and I look forward to working with you in the future. Thank you very much for coming. (Applause.)

The Federal Reserve was created by Congress in 1913, and it was entrusted with the power granted originally to the Congress by the U.S. Constitution to coin money and regulate the value thereof. Accordingly, it is incumbent on the Federal Reserve to report regularly to, and work closely with, the Congress. I look forward to a strong and constructive relationship with members of both the House and the Senate.

Former Chairmen Paul Volcker and Alan Greenspan also honor us with their attendance. Their leadership and insight have contributed immeasurably to the strength and stability of our economy. The nation and the world owe a debt of gratitude to these two great Americans. (Applause.) 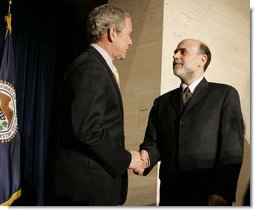 That these distinguished guests have chosen to join us today is a testament to the centrality of this institution in the nation's economic life. Our mission, as set forth by the Congress, is a critical one -- to preserve price stability, to foster maximum sustainable growth and output and employment, and to promote a stable and efficient financial system that serves all Americans well and fairly.

In his remarks in this building in 1937, President Roosevelt described our purpose: "To gain for all of our people the greatest attainable measure of economic well-being, the largest degree of economic security and stability."

As I contemplate taking up the challenge of leading this institution with such weighty responsibilities, I count first on the love and support of my family -- my wife, Anna; son, Joel and daughter, Alyssa, who are here today. I know also that I can rely on the enormous strengths of this institution's excellent leadership on the Board and in the Reserve banks, and unmatched expertise and experience in the staff.

Mr. President, as you probably know, on September 11th, 2001, and in the days that followed, Vice Chairman Roger W. Ferguson, Jr., who just swore me in, and many members of the Federal Reserve staff, here, in New York, and around the country worked inexhaustibly to ensure the continued functioning and the recovery of the American financial system. The dedication and knowledge demonstrated that day by so many people exemplifies why the Federal Reserve, as an institution, is far more than any single individual.

To my Board colleagues and to the staff here today, I would like to say, thank you -- thank you for your service to your country and your service to the world. I'm very happy to be back among you, and I look forward to working with each of you in the days and the years ahead. I'm confident that together we will meet whatever challenges the future will bring.