For Immediate Release
Office of the Press Secretary
January 31, 2006


I am pleased that the Senate has voted to confirm Judge Sam Alito as the 110th Justice of the Supreme Court. Sam Alito is a brilliant and fair-minded judge who strictly interprets the Constitution and laws and does not legislate from the bench. He is a man of deep character and integrity, and he will make all Americans proud as a Justice on our highest court. The son of an Italian immigrant, Judge Alito's appointment to the Supreme Court is the realization of the American dream for this good man and his family. I congratulate Judge Alito, his wife Martha, the Alito children, and Judge Alito's mother Rose on this historic achievement and momentous day in the life of our country. 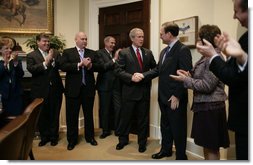 Judge Alito replaces Justice Sandra Day O'Connor. Justice O'Connor was the first woman ever to sit on the Supreme Court, and she is one of the most admired Americans of our time, or any time. Our Nation is grateful to Justice O'Connor for her extraordinary and dedicated public service, and Laura and I wish her and John all the best.