For Immediate Release
Office of the Press Secretary
January 30, 2006

THE PRESIDENT: I want to thank the members of my Cabinet for being here. We just had a really good discussion about the year 2006. Tomorrow night I'm going to be speaking to the Congress, giving the country my State of the Union address. I can't tell you how upbeat I am about our future, so long as we're willing to lead. 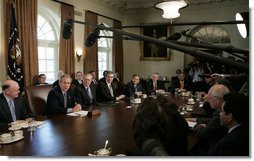 We talked about how to make sure that America continues to spread the peace and to protect ourselves. I heard from the Secretary of Defense and Deputy Secretary of State about very positive initiatives -- not only in the Middle East, but in the Far East, as well. We talked about how to make sure this economy of ours stays the strongest economy in the world, and that we recognize we can't just sit back and hope for the best, that we've got to lead. And so we had a good discussion about matters such as health care and energy and education, all of which I'll address tomorrow night.

I'm looking forward to speaking to the country. We've got a lot to be proud of. We've got a lot of work to do. One of the things I will do is call for Congress and the executive branch to have a good, honest dialogue, but to speak candidly with each other, but to do so in a way that brings credit to the process. And I'll do my best to elevate the tone here in Washington, D.C. so we can work together to achieve big things for the American people.

Q Thank you, Mr. President. The talks between Iran and the EU3 appear to be making little progress. A senior British official there said that they detect nothing new in their approach. What can be done now?

THE PRESIDENT: Well, obviously, one option is for the Perm 5 to work together to bring Iran to the U.N. Security Council. That's an option. And we're going to continue to work with our friends and allies to present a united front to the Iranians. And the message is: Give up your nuclear weapons ambitions. And the good news is most of the world recognizes that Iran, being the non-transparent society that it is, a government that had violated IAEA rules, is one that cannot be trusted with technology that could enable it to develop a nuclear weapon. And so we're united in our goal to keep the Iranians from having a weapon, and we're working on the tactics necessary to continue putting a united front out.

The other thing is that we want the people of Iran to be able to live in a free society. And so tomorrow night, I am going to talk about this issue and make clear the policy of the United States.

Q Mr. President, Israeli officials are seeking an international boycott of a Palestinian government that includes Hamas. Do you support this? And, if so, isn't that punishing the Palestinian people for exercising the democratic rights that you've called for in the region?

Secondly, this new democracy that's emerging in the Palestinian Territories must understand that you can't have a political party that also has got an armed wing to it; that democracies yield peace. And so the second half of our message to Hamas is get rid of your arms, disavow terrorism, work to bring what you promised to the people of the Palestinian Territories. Listen, these folks ran on the campaign "we're going to get rid of corruption" and that "we're going to provide services to the people," and that's positive. But what isn't positive is that they've got parts of their platform that will make it impossible for them to be a peaceful partner.