For Immediate Release
Office of the Press Secretary
January 30, 2006

Fourth Anniversary of USA Freedom Corps, 2006
A Proclamation by the President of the United States of America


Americans enjoy great liberty and prosperity, and with these blessings comes an obligation to reach out to those in need. Over the past 4 years, USA Freedom Corps has worked to rally America's armies of compassion and bring together individuals and organizations committed to volunteer service. More than 65 million people volunteered in 2005, an increase of 5.6 million since 2002. As we celebrate the fourth anniversary of USA Freedom Corps, we recognize the many Americans who have stepped forward to help others, and we underscore our commitment to serving our Nation and people around the world. 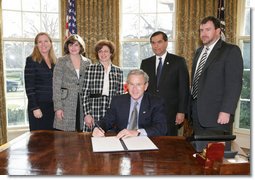 USA Freedom Corps was created to build on the countless acts of service, sacrifice, and generosity that followed the terrorist attacks of September 11, 2001. In the wake of the devastating tsunami of 2004 and hurricanes of 2005, Americans have continued to demonstrate that the true strength of our Nation lies in the hearts and souls of our citizens. By reaching out to aid the victims of these tragedies, people across our country helped rebuild shattered lives and communities. Their acts of service again demonstrated that by loving our neighbors as ourselves, we can offer hope and healing to those who suffer.

Through USA Freedom Corps, my Administration will continue to build a culture of service, citizenship, and responsibility in our country. To learn more about opportunities for volunteering, citizens can visit the USA Freedom Corps website at www.volunteer.gov. By working together for a cause greater than self, we can strengthen our Nation, one person, one neighborhood, and one community at a time.

NOW, THEREFORE, I, GEORGE W. BUSH, President of the United States of America, by virtue of the authority vested in me by the Constitution and laws of the United States, do hereby proclaim the Fourth Anniversary of USA Freedom Corps. I call upon the citizens of this great country to find ways to volunteer and help their fellow Americans. I commend the efforts of USA Freedom Corps and all those who have already answered the call to serve, and I encourage all Americans to donate their time, energy, and talents to the work ahead.

IN WITNESS WHEREOF, I have hereunto set my hand this thirtieth day of January, in the year of our Lord two thousand six, and of the Independence of the United States of America the two hundred and thirtieth.