For Immediate Release
Office of the First Lady
January 26, 2006

MRS. BUSH: Well, Darell is the real example for us. He's the one who heard a story, the way I understand it, Darell, about two little kids who hurt themselves badly because they just had an old car to play in. And so he got this idea to build playgrounds all over the country. And isn't it a wonderful idea? (Applause.) 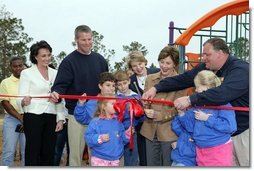 He's just a great example, and just another example of an American who thought of some way that he could help communities everywhere, and he stepped up and did it. And so now he's got a special project for the Gulf Coast, with a goal of building 100 playgrounds here, from New Orleans all the way over to Mobile. And that's so terrific. Thank you very much for that. (Applause.)

Play is really important for children, and it's one thing that will bring people back to their communities is if they know there's a good school for their children to go to and there are safe places for them to play.

We visited two schools, Secretary Spellings, the Secretary of Education, and I did earlier, one in Algiers in New Orleans, and then one in St. Bernard's Parish. The one in St. Bernard's Parish is the only school that's open there yet. It has all of the kids who have come back, Kindergarten through 12. And they go to school on the second floor; the first floor is still being redone, the part of it that had flooded.

But it's really very important to make sure all the communities across the Gulf Coast can get their schools back up and going, to have a good place for children to go to school, to have places, safe places for children to play. And then that will bring parents back, if they know their children can be safe.

Margaret and I were really inspired by the stories that we heard in the New Orleans area, and we're especially inspired here in Mississippi by what's going on here, all the different people that have come out to volunteer, all the people that have been volunteering here for months that aren't from Mississippi. A lot of the people from Hands On USA, the Hands On Network, were part of them. (Applause.) The 4-H people that are here, and, of course, our Seabees that are here, thank you all very, very much for coming over.

And just in case you don't know, these are White House Fellows. They're spending a year working at the White House. They have a fellowship to work in the administration. One of them, actually, Steve Parker, works in my office. He also happens to be a Major in the Army. But he is the White House Fellow working specifically on the Helping America's Youth initiative, with projects around the country, like KaBOOM, that do things to help children grow up to be successful adults. And so I want to thank you all very much, too, for coming down here to volunteer. (Applause.) 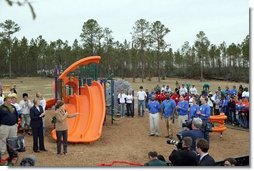 Margaret and I feel very, very encouraged as we look around. I know for everyone who lives here, who has lost their home on the Gulf Coast, that it seems like a long time, it's discouraging, it seems slow. But the fact is, there has been a lot of progress. And there's still so much to do. But I want to encourage all Americans, especially high school and college-age kids, to volunteer this year. Use your spring break or your summer vacation, and come down and volunteer somewhere here on the Gulf Coast. You can look at the USA Freedom Corps website to get a lot of volunteer opportunities. You can come with your church group. You can volunteer with any of these other organizations that are already down here. I know there are people still cooking that have been here since the hurricane, cooking for other people, and I want to encourage people to continue to do that, and then come on down. It will be a great way to spend your spring break or your summer vacation if you're in high school or college.

Thank you all so much. It was so much fun to get to be here, to see this terrific playground that's behind us. Thank you all for volunteering and for making this happen in one day for the kids here in this town in Mississippi. Thank you all and God bless you all. Thanks so much. (Applause.)