For Immediate Release
Office of the Press Secretary
January 25, 2006

THE PRESIDENT: Thank you very much. I just had a really interesting visit here at the National Security Agency, and I want to thank General Alexander and all the folks who work out here for their hospitality and their briefing. I gave a speech to the men and women who are dedicating their lives to serving the American people and preventing this country from being attacked again. I was also able to talk to folks who work for the NSA, via video. They're around the world -- some are in Iraq, some in Afghanistan. And it's just such an honor to be able to tell these people that the work they do is vital and necessary, and I support them a hundred percent. 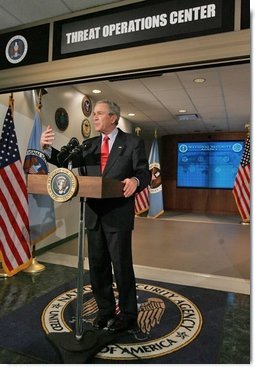 Most of the accomplishments, of course, that happen out here have got to be secret. But I know the good work they're doing. And so I want to assure the American people that we are lucky to have such professional, smart people working day and night to protect us.

The National Security Agency is playing a crucial part in the war on terror. First of all, the good folks who work out here understand we are at war, and they know what we know -- that we face determined enemies who will strike without warning. And they know what I know, that we must learn the intentions of the enemies before they strike. That's what they do here, they work to protect us. The efforts of the people out here are a crucial part in protecting the homeland, and they've been a crucial part in success in Iraq and Afghanistan, as well.

Part of the war on terror -- we've seen that part of the terrorists' strategy is to place operatives inside of our country. They blend in with civilian population. They get their orders from overseas, and then they emerge to strike from within. We must be able to quickly detect when someone linked to al Qaeda is communicating with someone inside of America. That's one of the challenges of protecting the American people, and it's one of the lessons of September the 11th.

When terrorist operatives are here in America communicating with someone overseas, we must understand what's going on if we're going to do our job to protect the people. The safety and security of the American people depend on our ability to find out who the terrorists are talking to, and what they're planning.

We know that two of the hijackers who struck the Pentagon were inside the United States communicating with al Qaeda operatives overseas. But we didn't realize they were here plotting the attack until it was too late.

Here's what General Mike Hayden said -- he was the former director here at NSA. He's now the Deputy Director of the National Intelligence -- Deputy Director of National Intelligence -- and here's what he said earlier this week: "Had this program been in effect prior to 9/11, it is my professional judgment that we would have detected some of the 9/11 al Qaeda operatives in the United States, and we would have identified them as such."

The 9/11 Commission made clear, in this era of new dangers we must be able to connect the dots before the terrorists strike so we can stop new attacks. And this NSA program is doing just that. General Hayden has confirmed that America has gained information from this program that would not otherwise have been available. This information has helped prevent attacks and save American lives. This terrorist surveillance program includes multiple safeguards to protect civil liberties, and it is fully consistent with our nation's laws and Constitution. Federal courts have consistently ruled that a President has authority under the Constitution to conduct foreign intelligence surveillance against our enemies.

My predecessors have used the same constitutional authority on numerous occasions. And the Supreme Court has ruled that Congress gave the President additional authority to use the traditional tools -- or "fundamental incidents" -- of war in the fight against terror when Congress passed the authorization for the use of military force in 2001. These tools include surveillance to detect and prevent further attacks by our enemies. I have the authority, both from the Constitution and the Congress, to undertake this vital program. The American people expect me to protect their lives and their civil liberties, and that's exactly what we're doing with this program.

I'll continue to reauthorize this program for so long as our country faces a continuing threat from al Qaeda and related groups. This enemy still wants to do harm to the American people. We cannot let the fact that we have not been attacked lull us into the illusion that the threats to our nation have disappeared. They have not disappeared; the terrorists are still active. And we've seen their activity in London and Madrid and Bali and Beslan and Amman and Baghdad and many other places since September the 11th. Just last week, as I mentioned earlier, we heard from Osama bin Laden. The terrorists will do everything they can to strike us. And I'm going to continue to do everything I can within my legal authority to stop them. And so are the good people here at NSA.

In the long run, we can be confident in the outcome of this struggle, because we've seen the power of freedom to defeat tyranny and terror before. And we can be confident because we know our military and law enforcement and homeland security and intelligence professionals are working day and night to protect us.

I'm grateful for the skill and dedication of the good folks who work out here. These are fine patriots and they're making America safer. Thank you all very much.