For Immediate Release
Office of the Press Secretary
January 18, 2006

THE PRESIDENT: Listen, thank you all for coming. It's been my honor to visit with folks who know firsthand the brutality of Saddam Hussein. These are folks who have suffered, one way or the other, because the tyrant was a law unto himself, and was willing to deny people basic human rights. The stories here are compelling stories. They're stories of sadness and stories of bravery. 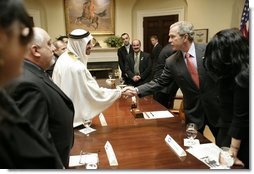 In the course of our discussion, we were also able to talk about what a contrast it is between a society which was willing to jail people, torture people and beat people and kill people, to a society that is beginning to understand the fruits of democracy and freedom.

Last year was an amazing year in Iraq. Millions of people went to the polls to vote first in January, then to ratify a constitution, and then back to the polls again to elect a government under the new constitution. It's a testimony to the courage of the Iraqi people. Obviously, we still have got work to do, and fully intend to do it.

And one of the interesting moments will come here this year when Saddam Hussein's trial is brought forth for the world to see, to see the butcherer, the person who brutalized many people or ordered the brutality of many people here at this table, get his due justice under rule of law.

And so I want to thank you all for coming. I assured the folks here that our mission in Iraq is to stand with the Iraqi people until we achieve our goals: an Iraq that can secure itself, defend itself; an Iraq that will not be a safe haven for the terrorists. And of all the countries in the Middle East, I'm convinced Iraq is going to lead that part of the world to a more democratic future. The Iraqi people are brave and courageous and smart people.

And so thank you for being here. Thank you for sharing your stories. I appreciate it very much.