For Immediate Release
Office of the Press Secretary
January 17, 2006

PRESIDENT BUSH: You're probably wondering what the Prime Minister is sharing with me. First of all, welcome. We're talking mountain biking -- actually, he's talking about the Tour de France. He's a huge advocate and a follower of the bike scene around the world. He's also an avid mountain biker. And one of these days he and I are going to ride; he's going to give me a lesson on how to ride a mountain bike. 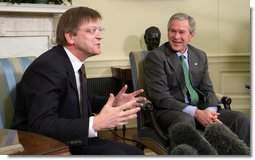 First of all, welcome. Thanks for the wide-ranging discussion. I've been honored to know Guy for a long period of time. We have got a close relationship. And we talked about the importance of transatlantic relations, about how it's important for the United States to work with the European Union to reach common objectives and to help work together to make this world a more peaceful place and a better place for people.

We talked about bilateral relations, and the Prime Minister brought up an antiquated tax treaty that he believes needs to be looked at by our government in order to facilitate trade between Belgium and the United States.

We talked about Africa; in particular, the Congo. And I want to thank you for your leadership, Mr. Prime Minister, on this very important issue. I told the Prime Minister my government would work very closely with the Belgium government to help the people of the Congo realize their full potential.

We had a wide-ranging discussion, as to be expected among friends, and it's been my honor to welcome him here and I'm glad you're here.

There is certainly a lot of work still to do, and I think that common point of view and a common policy of the U.S. and of Europe on issues like the Middle East, like Iran, is certainly absolutely necessary and can improve this transatlantic relationship.

About the Congo, it's very clear that we have to help. The transition period is at this moment successful. We hope for elections in April, a second round in June. But we have already discussed what after these elections. The international community has to continue to help and to seek good governance in the Congo and in Central Africa.

So that were, in any way, the most important elements, and then at the end, in fact, we shall start a negotiation with the American administration to have a new tax treatment between Belgium and the U.S., to avoid double taxation in the future.