For Immediate Release
Office of the First Lady
January 16, 2006

Press Briefing by the First Lady After Liberia Inauguration
Aboard Plane

MRS. BUSH: Well, we had a very exciting day. The inauguration of the President of Liberia was everything I hoped it would be. I loved her inaugural address. I thought what she said about corruption, for instance, was very important to her country; what she said about being the President of all the people was important. And I thought it was really sweet when she told the children of Liberia that she loved them. I liked that a lot, I thought it was really a very wonderful day, and I'm proud to have been the one to get to go with Dr. Rice to represent the United States at President Johnson-Sirleaf's inauguration. 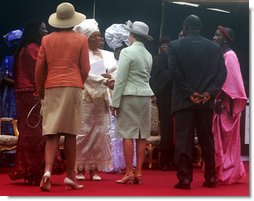 MRS. BUSH: Well, I think the people of Liberia are very, very proud of Dr. Rice. As all of you know, Liberia was started by freed slaves, African Americans founded Liberia. And if you looked at the program -- I don't know if you saw the program of the inauguration, but with the list of all of their former presidents, their first several presidents were born in the United States, starting about 1840*, I think, was when Liberia was founded.

Q Did you have any opportunity to talk with President Johnson-Sirleaf?

MRS. BUSH: Very little. We got to meet twice. When we first came in, we went over and paid our respects to her, and then at the very end, she stopped by and spoke again. I got to tell her that I was impressed with her inaugural address, that I liked it a lot. I also told her when we first paid our respects to her before the inauguration that I brought the very best wishes of the American people to her, and of the President, of course, to her.

I want to encourage the American people to keep an interest in Liberia after this inauguration. I hope that her goals that she outlined in her inaugural address are goals that can be met. And I know they can be if the international community, and particularly the United States, stands with the people of Liberia.

Q Do you have any reaction to what we saw on the way in?

MRS. BUSH: Well, we saw a lot of really very interesting things on the way in. I rode in with the Ambassador, so I saw the rubber plantation. I don't know if you smelled the smell when we first got off, but it's the smell of latex, processing latex. And that's a natural resource that Liberia has, that hopefully they'll be able to rebuild their economy and rebuild the rubber plantation and the latex processing plants, now that the civil war is over, now that they have a fair and free election and a new President. 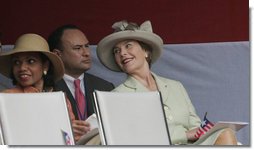 They have a lot of natural resources. I don't know if you also noticed the banana palms and the coconut palms that are natural there. They get about 200 inches of rain a year.

So they have the chance to be an agricultural -- really, for the whole continent of Africa, a real agricultural headquarters. And so I hope they'll be able to do that.

Q -- symbolic of your whole trip here, empowering women. I talked to a first lady historian before I came, and he thought maybe this -- he sort of used the words "international feminism" is a theme for your --

Plus they can contribute to the economy. And in Liberia, the farmers traditionally were women. And now, because of! the 14 years of civil war, a lot of women are no longer on their land that they farmed before, but hopefully they'll be able to go back to their own properties and start that again.

Q Speaking of civil war, and also now that you've seen some of the country and some of the devastation that that civil war caused, do you think it's time for Charles Taylor to be brought to war crimes trial?

MRS. BUSH: Well, I know that the President of Liberia will work to do what's best for Liberia, and also to bring Charles Taylor to justice. This is a time of reconciliation right now in Liberia with her inauguration following the contested -- very contested election. And so I assume, and I think, that she will work to bring him to justice.

Q Mrs. Bush, did you give any special message from the President?

MRS. BUSH: Yes, I just gave her the very best wishes from the President when I spoke to her and told her that we would stand with the people of Liberia and that I'm really honored to have the chance to be the one that got to come along with Dr. Rice to her inauguration.

Q Did you invite her to Washington again?

Q Not to diminish what you've done, what you're doing in the states, but this is your fifth foreign trip -- you've had four in this term, the second term. Do you sense that your legacy may (inaudible) foreign countries?

MRS. BUSH: Actually, I think that what happened to me really happened also to the other people in the United States, and that is after September 11th, when we all looked at Afghanistan and saw the oppression of women there, it awakened a lot of people to the plight of women around the world. As we look more and more at AIDS and what we can do in the United States to help alleviate AIDS suffering around the world, we realize more and more that girls' education is a key part of it.

So I don't -- although education has always been what I'm interested in for my whole life, I didn't expect, really, when George was elected, that I would be interested in education worldwide like I am. But it's just turned out, under the circumstances of what we've lived through in our country for the last few years that it's a really important piece that the United States can help worldwide with.