For Immediate Release
Office of the Press Secretary
January 11, 2006


Today, the President signed legislation implementing the United States Bahrain Free Trade Agreement (the "Agreement"). The Agreement enhances our bilateral relationship with a strategic friend and ally in the Middle East region and promotes economic growth and prosperity in both nations. 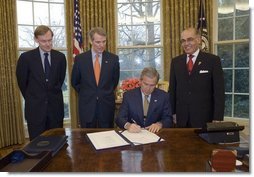 The Agreement reflects the President's commitment to opening markets and expanding opportunities for American workers, farmers, ranchers, and businesses. As the Agreement opens Bahrain's market for U.S. manufactured goods, agricultural products, and services, it will also support economic reform and growth for Bahrain. Leaders in Bahrain support the pursuit of social and economic reforms in the region, encouraging foreign investment connected to broad-based development, and providing better protection for women and workers.

The Agreement is also a significant step in furthering the President's goal of creating a Middle East Free Trade Area (MEFTA) by 2013. Through MEFTA, the United States seeks to expand trade with and investment in Middle East countries to further their domestic reforms and the rule of law, protect intellectual property, and create a foundation for economic growth and prosperity. Since the President announced MEFTA in May 2003, the United States has completed free trade agreements with Bahrain, Morocco, and Oman; initiated FTA talks with the United Arab Emirates; assisted in the accession of Saudi Arabia to the WTO; and signed six Trade and Investment Framework Agreements with Middle East countries, among other initiatives.

The United States will continue to expand MEFTA as a vital tool to address the economic, social, and political challenges facing the Middle East.