For Immediate Release
Office of the Press Secretary
January 1, 2006

THE PRESIDENT: Happy New Year to you all. Thanks. I can't think of a better way to start 2006 then here at this fantastic hospital -- a hospital that's full of healers and compassionate people who care deeply about our men and women in uniform. It's also full of courageous young soldiers, Marines, airmen -- men and women who are serving our country and making great sacrifice. I'm just overwhelmed by the great strength of character of not only those who have been wounded, but of their loved ones, as well. And so, thank you all for bringing great credit to our country. 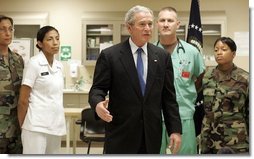 As you can possibly see, I have an injury myself -- not here at the hospital, but in combat with a Cedar. I eventually won. The Cedar gave me a little scratch. As a matter of fact, the Colonel asked if I needed first aid when she first saw me. I was able to avoid any major surgical operations here, but thanks for your compassion, Colonel.

I've been thinking long and hard about 2006. My hopes, of course, are for peace around the world. I'll continue to work as hard as I can to lay that foundation for peace. And also my hope is that this country remains as prosperous as it was in 2005. We had a very strong economy, and we'll work to keep the economy as strong as it possibly can, so anybody that wants to find a job can find one.

With that, I'll be glad to answer a couple of questions. Toby. Or, Deb. You are Deb, right?

Q Yes, sir. Mr. President, were you aware of any resistance to the launching of the NSA program at high levels of your administration, and if so, how did that influence your decision to approve it?

THE PRESIDENT: First of all, the NSA program is an important program in protecting America. We're at war, and as Commander-in-Chief, I've got to use the resources at my disposal, within the law, to protect the American people. And that's what we're doing.

The NSA program is one that listens to a few numbers, called from the outside of the United States and of known al Qaeda or affiliate people. In other words, the enemy is calling somebody and we want to know who they're calling and why. And that seems to make sense to me, as the Commander-in-Chief, if my job is to protect the American people.

Now, some say, well, maybe this isn't a war; maybe this is just a law enforcement operation. I strongly disagree. We're at war with an enemy that wants to hurt us again, and the American people expect the Commander-in-Chief to protect them, and that's exactly what I intend to do. 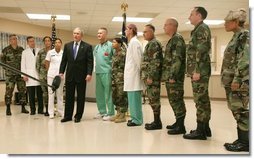 Q Mr. President, as we start the New Year, what is your outlook for U.S. troop withdrawal from Iraq in 2006?

Q In 2004, when you were doing an event about the Patriot Act, in your remarks you had said that any wiretapping required a court order, and that nothing had changed. Given that we now know you had prior approval for this NSA program, were you in any way misleading?

THE PRESIDENT: I was talking about roving wire taps, I believe, involved in the Patriot Act. This is different from the NSA program. The NSA program is a necessary program. I was elected to protect the American people from harm. And on September the 11th, 2001, our nation was attacked. And after that day, I vowed to use all the resources at my disposal, within the law, to protect the American people, which is what I have been doing, and will continue to do. And the fact that somebody leaked this program causes great harm to the United States.

There's an enemy out there. They read newspapers, they listen to what you write, they listen to what you put on the air, and they react. And it seems logical to me that if we know there's a phone number associated with al Qaeda and/or an al Qaeda affiliate, and they're making phone calls, it makes sense to find out why. They attacked us before, they will attack us again if they can. And we're going to do everything we can to stop them.

Q Mr. President, with this program, though, what can you say to those members of the public that are worried about violations of their privacy?

THE PRESIDENT: Ed, I can say that if somebody from al Qaeda is calling you, we'd like to know why. In the meantime, this program is conscious of people's civil liberties, as am I. This is a limited program designed to prevent attacks on the United States of America. And I repeat, limited. And it's limited to calls from outside the United States to calls within the United States. But they are of known -- numbers of known al Qaeda members or affiliates. I think most Americans understand the need to find out what the enemy is thinking. And that's what we're doing.

We're at war with a bunch of cold-blooded killers who will kill on a moment's notice. And I have a responsibility, obviously, to act within the law, which I am doing. It's a program that's been reviewed constantly by Justice Department officials, a program to which the Congress has been briefed, and a program that is, in my judgment, necessary to win this war and to protect the American people.

THE PRESIDENT: First of all, Mike, I'm conscious not to be trying to substitute myself for God. I am, on the other hand, inspired by the mom who told me upstairs that she prays every day and believes in the miracle of healing; that I think we see God's work here every day. I think when you find nurses and doctors who work around the clock, who come in at a moment's notice to save a life, I happen to believe there's a lot of divine inspiration to that kind of dedication and work. The parents I saw or the wives I saw, many of them were in prayer on a regular basis for their loved one.

And, you know, war is terrible. There's horrible consequences to war -- that's what you see in this building. On the other hand, we also see people who say, I'd like to go back in, Mr. President, what we're doing is the right thing, because many of these troops understand that by defeating the enemy there, we don't have to face them here. And they understand that by helping the country and the Middle East become a democracy, we are, in fact, laying the foundation for future peace. And, I, as the Commander-in-Chief, I am resolved to make sure that those who have died in combats' sacrifice are not in vain. And I am resolved to make sure that these kids who are recovering here, that have suffered terrible injury, that their injuries are not in vain by completing the mission and laying that foundation for peace for generations to come. And I'm optimistic we'll achieve that objective.