For Immediate Release
Office of the Press Secretary
December 20, 2005

THE PRESIDENT: Thank you all. Thanks for the warm welcome. It's nice to be back here at the State Department. I'm glad to be with my friend, Condi Rice, who's doing a fabulous job as our Secretary of State. (Applause.) It's also good to be here with the Board and staff of the Millennium Challenge Corporation. And I'm proud to be here to congratulate the new Chief Executive Officer, Ambassador John Danilovich. 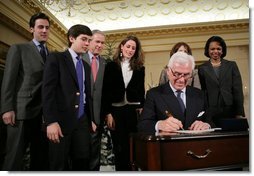 This is a vital part for our country and for my administration. And that's why I've come. The MCC is an integral part of our strategy to fight poverty and to encourage economic development. And leading this organization requires a combination of idealism and managerial skill and diplomatic savvy and economic expertise. John Danilovich has those qualities -- that's why I picked him and that's why he's going to be a great executive leading this important corporation.

I'm also proud to be standing up here with Irene; and I'm glad to be with his three children, J.C., Alice and Alex, proud members of the Danilovich family. I appreciate Ambassador Negroponte being here today -- thank you, John. He's doing a fine job as the Director of National Intelligence. In order to defeat the enemy, we have got to have the best intelligence possible. Thanks for your leadership.

Deputy Secretary Bob Kimmitt of the Treasury is with us. I see my friend, Mosbacher, here, from OPIC. Thanks for coming, Rob. Members of the administration too numerous to mention are here, and I want to thank the ambassadors, members of the Diplomatic Corps, Your Excellencies, thanks for being here today.

America is founded on the belief that every life has dignity and every life has value, and we have long felt a special responsibility to help the less fortunate. For decades, our country sent aid to developing -- to the developing world with the best of intentions -- but we did not ask if we were getting the best of results. Too often, American aid was squandered by inept leaders, pocketed by corrupt officials, and swallowed up by rampant inflation. Without insisting on accountability in exchange for generosity, we were not serving the people of the developing countries, and we were not serving American taxpayers.

And so my administration decided to do something about it. We decided to insist upon results. Almost two years ago, we launched the Millennium Challenge Account as an entirely new way to provide aid. The MCA is based on clear principle: countries that seek our aid must demonstrate a record of performance. I don't think that's too much to ask on behalf of the taxpayer, nor is it too much to demand on behalf of people living in the countries we're trying to help.

Specifically, countries seeking MCA assistance have got to show results in three key areas. They must govern justly -- that makes sense. They must invest in their people -- that's a wise use of money. And they must encourage economic freedom.

Poor countries that prove a commitment to these sound policies are eligible to apply for an MCC compact. That's an interesting word, "compact." It means we're working together. It means these countries have to design a proposal that will reduce national poverty and stimulate economic growth. We consider each proposal through a rigorous process -- sometimes too slow and too rigorous -- and then award compacts to countries with wise proposals that include a way to measure results. By requiring countries to create and implement their own strategies, they have a stake in their own success -- and we're giving Americans reason to be confident as we spend their money.

The Millennium Challenge Account has the potential to transform the way the world delivers aid. So far, we have signed compacts with five nations, and committed to deliver nearly a billion dollars in assistance. That money is making life-changing difference in some of the poorest countries in the world. In Madagascar, where 80 percent of the people live on less than $2 a day, the MCA compact is helping to modernize the national land registry, which will help secure property rights for more than 60,000 families. In Honduras and Nicaragua, MCA compacts are helping farmers improve their business plans to grow more profitable crops, and to get the crops to the markets faster. In Georgia, where I visited last spring, an MCA compact is helping to rebuild a gas pipeline that will provide reliable heat and electricity for more than a million people. And in Cape Verde, off the Atlantic coast of Africa, an MCA compact is funding the construction of new roads and bridges that will connect some of the nation's key islands. These small nations are making big commitments, and America is proud to stand by their side.

We have more to do to fight poverty. I believe central to our foreign policy must be, to whom much is given, much is required. That's why we're leading the fight against HIV/AIDS. That's why we're feeding the hungry. And we're going to continue to help eradicate poverty around the world. John Danilovich is the right person to take on this part of our efforts to fight poverty. He knows how to set priorities, he knows how to solve problems, he knows how to cut through bureaucracy.

In his first six weeks on the job, he has taken steps to streamline the administration at the Corporation, and to expedite the application process for eligible countries. John and the MCC board will now consider the applications of nearly two dozen countries that were recently selected as eligible for compacts. Many of these countries have made good progress on their proposals. I've asked John to complete and sign several more compacts in the coming months.

It's a good program. Let's get it moving and let's implement it for the sake of -- for the sake of eliminating poverty around the world. The success of the MCA is reinforcing our belief that lifting nations out of poverty requires partnership -- not paternalism. In the 21st century, America is willing to be a partner with every nation that works to advance the prosperity, equality and liberty of its people.

Congratulations, John. Thanks for your willingness to serve. (Applause.)

AMBASSADOR DANILOVICH: Mr. President, Madam Secretary, members of the administration, distinguished guests, family and friends. Mr. President, I want to thank you for your generous words of support and entrusting me with the leadership of the Millennium Challenge Corporation. And I want to express my personal appreciation for your presence and remarks here this morning to reiterate your commitment to this initiative, and to reinforce our efforts to fulfill that vision.

Your bold, creative, and innovative vision of the Millennium Challenge Account, to reduce poverty through sustainable economic growth, represents the most significant and dynamic initiative in development assistance since the Marshal Plan. In response to your call to action, the MCC has taken shape, and with the leadership of Secretary Rice as our chair, a distinguished board, and a dedicated MCC staff, I can assure that we are now moving expeditiously to fulfill your mandate.

Our core principle is that growth occurs fastest in countries that adopt and adhere good policies, and that foreign assistance is most effective in countries that are democratic and practice good governance, invest in the well-being of all of their people -- men and women -- and encourage economic freedom. Our 16 policy indicators are used to select countries that are fighting corruption, to provide an environment for free and open exchange of ideas, that create a just and equitable legal system, and that invest in health and education.

Through a consultative process and country ownership, we promote and create incentives for a culture of accountability and transparency. Our MCA countries are taking the at times difficult, complicated, and in some cases, previously unimaginable, but absolutely necessary steps, to put in place the reforms to be eligible for MCA funding.

These are not Pollyanna remedies. They hammer home a tough but clear message of reason, compassion and hope that enable these countries to use the tools in their own hands to reduce poverty and provide them with a firm grip on the ladder of economic development and growth.

We're presently working with 23 countries that are eligible for MCA funding. We have signed five compacts, as the President noted, with Madagascar, Cape Verde, Nicaragua, Honduras and Georgia, and have committed nearly $1 billion to implement these compacts. We plan to sign three more compacts in the immediate future, and several more throughout 2006.

From Mongolia to Morocco, Mali and Mozambique, to Gambia, and Ghana and Namibia and Lesotho, to Benin and Burkina Faso and Tanzania, to Bolivia and El Salvador, to Senegal, Sri Lanka and East Timor, to Armenia and Banawatu, your initiative, Mr. President, has begun to provide the impetus for social, economic and political reform and transformation. And these countries know that the President of the United States, the Secretary of State, members of Congress and the MCC acknowledge their efforts, and are willing to support and reward them.

Mr. President, Madam Secretary, you have my commitment and the commitment of all of us at MCC to see this through. I want to express my gratitude to Senator Lugar and to Congressman Kolbe, and other members of our Congress, for their support in this effort.

I also want to thank my family -- my wife, Irene, and our children, John Charles, Alice and Alexander -- for their support and understanding. In Costa Rica and Brazil and now Washington, they have responded with strength, grace, and agility to the bands upon them, and they have been outstanding ambassadors for our country.

And Mr. President, Madam Secretary, I thank you for your guidance and support of the MCC and for your friendship. Thank you very much. (Applause.)