For Immediate Release
Office of the Vice President
December 19, 2005

Vice President's Remarks at a Rally for the Troops in Afghanistan
Bagram Air Field
Bagram, Afghanistan

THE VICE PRESIDENT: Don't hold back. (Laughter.) Well, that's quite a welcome. And Lynne and I are delighted to be here today. And I want to thank you for that fantastic welcome. And, General Eikenberry, for your kind words, and say good afternoon to my fellow Americans. Let me also thank General Sterling and Command Sergeant Major Savusa. It's great to be here today. I have a message from the folks back home: We're proud of you; we're grateful for your service; and we're behind you 100 percent.

It's good to be back at Bagram Air Field, and to express our country's appreciation to every man and woman in Joint Task Force 76. I'm only sorry I didn't come earlier this month. Somebody told me I missed a chance to meet Vince McMahon, Big Show, and Triple H. (Applause.)

I was last here a year ago, and over this time you have done extraordinary work fighting terrorists, standing up the Afghan security structure, building a secure and peaceful future for Afghanistan. With Christmas and Hanukkah just around the corner, I wanted to come and let you know how impressed we've been with the tremendous progress you've made. And to each and every one of you, I bring the personal gratitude and the good wishes of our Commander-in-Chief, President George W. Bush. (Applause.)

More than four years have passed since the United States was attacked by a terror network that received support and safe harbor from the Taliban regime. And after the awful events of September 11th, this nation set out to hunt down the terrorists, one by one if necessary, and to hold accountable regimes that gave shelter to the enemies of civilization. With good allies at our side, we came into Afghanistan, joined up with freedom fighters, and began dismantling the training camps of terror and the apparatus of a violent regime. It was a huge and challenging task to face these enemies in their own element -- going into rugged, isolated territory to find terrorists who dwell in the shadows, in mountain ledges, and caves.

Some of the challenges in the Afghan campaign were unprecedented. For example, our naval expeditionary forces had to establish a forward-operating base 450 miles inland -- more than twice the distance that previous doctrine considered supportable. And yet for all the difficulties we had to confront, America and our superb coalition partners acted with speed and precision -- bringing down the Taliban, capturing or killing hundreds of al Qaeda, and liberating 25 million people from tyranny.

As we pledged to do, our coalition has stood with this nation and helped prepare the way for democratic institutions and a free society. On our trip last December, Mrs. Cheney and I had the privilege of attending the inauguration of President Hamid Karzai. Just this morning we witnessed another milestone, as newly elected representatives took their place as members of the Afghan Parliament. Once again, in free elections, the Afghan people have shown the world their determination to chart their own destiny. In this journey of freedom and progress, they will continue to have the full support of America and our coalition. We are proud to count Afghanistan as a free country, a fellow democracy, and a friend of the United States of America. 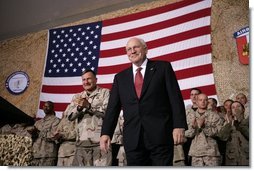 We are firmly committed to the safety of the Afghan people, to the success of this democracy, and to lasting peace and stability in the region. And by serving here today, each and every one of you is playing a vital role in that cause. There is still a terrorist element in this country, and some Taliban die-hards who apparently are slow learners. (Laughter.) The job of this Task Force is to find these enemies, to confront them directly, and to take them out of commission. And that is the business at hand, and you're doing it extremely well.

I also want you to know, ladies and gentlemen, that I was in Iraq yesterday, and spent some time with soldiers, Marines, and Navy corpsmen serving in the western part of the country. Your comrades are doing fantastic work over there. On occasion they receive mixed signals from politicians about whether America has what it takes to stay in the fight. I assured them that the American people do not support a policy of submission, resignation, and defeatism in the face of terror. In the war on terror we are up against an entirely new kind of threat to our security -- a threat global in scale, and often hidden from view. And the United States has made a decision: We will engage the enemies of civilization. We will face them with our military far from home, so we do not have to face them on the streets of our own cities.

Along with the American servicemen and women in Task Force 76, I want to express our nation's gratitude to all the personnel operating here at Bagram, and to the men and women from other nations in the coalition. Together you are "One Team." You've stayed on the offensive from day one, and your tremendous skill and professionalism are helping to make history.

In this fight our special forces, expeditionary forces, and Task Force Devil are at the tip of the spear -- going into the high mountains and along border areas. In the intel, surveillance, and reconnaissance operations, our coalition is using aircraft, drones, and people on the ground to keep an eye on the enemy in order to strike at the right moment. Our forces have also found and destroyed enemy weapons caches and IED cells. Overhead, the EC-130s provide an electronic shield around ground forces, giving them another edge against the enemy. Here at Bagram you operate the busiest runway in Afghanistan, and the 455th ECES is out there every day keeping it in great repair.

At the same time, our coalition is building up the infrastructure to improve both security and living conditions in Afghanistan. Three major all weather combat roads have been built in the last eight months, making our forces less vulnerable to IEDs while helping to unify this country and strengthen its economy.

The capability, confidence, and experience level of the Afghan forces continues to rise month by month. There have been many joint operations, including some very tough combat against the terrorists. Since last March, JTF-76 has completed over two hundred combat operations, and increased operations with the Afghan National Security Forces. The Afghan military is a respected institution, committed to its duties, and critical to the success of this nation. Americans are proud to serve with the forces of a free Afghanistan.

The people of Afghanistan have been through so much -- from hostile occupation by the Soviet Union in the 1980s, to the horrors of the Taliban in the 1990s. But this young century is turning out to be a time of promise -- with a democracy, a market economy, equality for women, and millions of children going to school for the first time. America has made a long term commitment to freedom and progress in this land. And in your conduct as members of the military here at Bagram, you are showing the true character of the United States. I think of people like those in Joint Task Force 76 Surgeon, who have provided medical care to thousands of Afghan citizens, and also veterinary care to farm animals and pets. I think of all that was done to provide relief after the earthquakes in this area- with our military moving thousands of tons of equipment and supplies to the affected areas, and providing treatment to thousands of people who were injured.

I think as well of the great kindness you've shown in the "Adopt-A-Village" program, as you go into Afghan communities with clothing, school supplies, and toys. After going into a village one of our soldiers said, "Once the trip's over, you're really proud of what you've done and of the country you serve." It speaks well of America, and of our military, that we have people like you building ties of friendship with the citizens of Afghanistan. And it's another reason the folks back home are grateful to you.

By fighting enemies, by standing with our friends, we honor both the ideals and protect the security interests of the United States. The victory of freedom in Afghanistan, as well as in Iraq, will be an inspiration to democratic reformers in other lands. In the broader Middle East and beyond, America will continue to encourage free markets, democracy, and tolerance -- because these are the ideas and aspirations that overcome violence, and turn societies to the pursuits of peace. And as the people of this region experience new hope, progress, and control over their own lives, we will see the power of freedom change our world, and a terrible threat will be removed from the lives of our children and our grandchildren.

Each one of you is helping to write a very proud chapter in the history of freedom. You've carried out your duties in difficult conditions, far from home and family, often risking your lives, and experiencing the loss of comrades. You have done everything we've asked of you. You have conducted yourselves with professionalism and with honor. And when you return home from this part of the world, you can be proud of your service for the rest of your life. (Applause.)

Once again, I thank you for a wonderful job on behalf of the United States. I want you to know, especially at Christmastime, how much you mean to America. This is a season for counting our blessings, and Americans realize how fortunate we really are to have people like you wearing the uniform of our country. I want to thank you, once again, for serving far from home, in an hour of great need. You reflect immense credit on the uniform you wear and on the cause you serve, and the nation is proud of each and every one of you.

"One Team, One Fight." Thank you very much. (Applause.)