For Immediate Release
Office of the Press Secretary
December 15, 2005

THE PRESIDENT: It's my honor to welcome two good friends, the Chairman, John Warner, and, of course, John McCain -- Senator John McCain, here to the Oval Office. We share a common goal, and that is to protect the American people and to win the war on terror.

Senator McCain has been a leader to make sure that the United States of America upholds the values of America as we fight and win this war on terror. And we've been happy to work with him to achieve a common objective, and that is to make it clear to the world that this government does not torture and that we adhere to the international convention of torture, whether it be here at home or abroad. And so we have worked very closely with the Senator and others to achieve that objective, as well as to provide protections for those who are on the front line of fighting the terrorists. 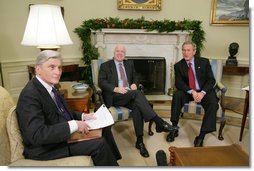 And so I appreciate your hard work, Senator. You're a good man who honors the values of America. I also appreciate the strong support that you've given -- both of you have given in the war on terror. The central front of that war is Iraq. Part of our strategy is to train Iraqis so they can join our forces and fight off the terrorists and, eventually, have the Iraqis be able to stand on their own. The other part is the democratic process that will help marginalize the Saddamists and the rejectionists.

And today, the Iraqi people went to the polls. I was so honored to welcome some young Iraqi Fulbright Scholars here that were able to vote, and to see the joy -- and to hear the joy they expressed and to see the joy on their faces after having just voted in a -- for a permanent government and a new constitution was just a fantastic experience.

And so I want to welcome you all to the Oval Office. Thanks for coming. Thanks for your good work on behalf of America.

SENATOR McCAIN: Thank you, Mr. President. I want to take this opportunity to thank you for the effort that you made to resolve this very difficult issue. I thank you for your active participation in it. And I also want to thank your National Security Advisor, Steve Hadley, who played a very important role, as well. And I'm very pleased that we reached this agreement, and now we can move forward and make sure that the whole world knows that, as the President has stated many times, that we do not practice cruel, inhuman treatment or torture.

This agreement basically does two things: One, puts into the Army Field Manual the specific procedures for interrogations. And two, it prohibits cruel, inhumane -- or torture.

In our negotiations, there was legitimate concerns raised by the administration concerning the rights of interrogators. And taking language from the Uniform Code of Military Justice, we provide them with legal counsel and certain protections that a reasonable person might view as carrying out of orders, not to contradict the Nuremberg decision, which, of course, said that obeying orders is not a sufficient defense.

I, again, thank the President. And I would like to also repeat, we've sent a message to the world that the United States is not like the terrorists. We have no brief for them, but what we are is a nation that upholds values and standards of behavior and treatment of all people, no matter how evil or bad they are. And I think that this will help us enormously in winning the war for the hearts and minds of people throughout the world in the war on terror.

And again, I want to thank the President; I want to thank Steve Hadley; I thank all the people who worked so hard to come to this agreement. Now I think we can move forward with winning the war on terror and in Iraq.

I thank you, Mr. President.

THE PRESIDENT: Thanks, John.