For Immediate Release
Office of the Press Secretary
December 6, 2005

THE PRESIDENT: It's been my honor to welcome the Director of the World Health Organization, Dr. Lee, to the Oval Office, where we have just had an extensive conversation with high-ranking officials in my administration about the international strategy to deal with a possible pandemic of avian flu.

And I want to thank you, Dr. Lee, for staying on top of this issue; for raising the consciousness of the world; for helping to develop an international response; and for working so closely with Mike Leavitt and Julie Gerberding and Bob Zoellick of the State Department. This is a remarkable collaborative effort to do our duty to help people. 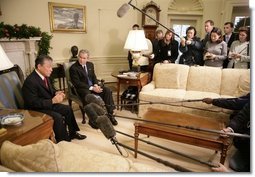 THE PRESIDENT: You're a good public servant. I'm just proud to welcome you here, to the Oval Office.

DIRECTOR LEE: Well, thank you very much. Clearly, we've been working on avian flu and pandemic flu for many years. But it really didn't take off until the President launched this initiative in September, in New York. And then after that, he mentioned -- he raised this issue with many heads of state. That really made a difference. I'm very honored to be here.

And about polio eradication, it was a teamwork. I appreciated the effort of the United States, especially the AID and CDC. And in the presence of the Secretary and also the Director, Julie Gerberding, that it is wonderful to be able to say that we are about to eradicate polio.

THE PRESIDENT: Thank you, Dr. Lee. Answer a couple of questions. Nedra.

Q Thank you, Mr. President. Insurgents in Iraq claim that they have taken a U.S. citizen hostage. We also have a U.S. peace activist who is being held. Is there anything you can do to get them back?

THE PRESIDENT: We, of course, don't pay ransom for any hostages. What we will do, of course, is use our intelligence gathering to see if we can't help locate them. The best way to make sure that Iraq is a peaceful society is to continue to spread democracy. And, clearly, there are some there who want to stop the spread of democracy. There are terrorists there who will kill innocent people and behead people and kill children; terrorists who have got desires to hurt the American people.

And it should be -- the more violent they get, the clearer the cause ought to be, that we're going to achieve victory in Iraq, and that we'll bring these people to justice. We will hunt them down, along with our Iraqi friends, and at the same time, spread democracy.

Q Howard Dean says the idea that the U.S. will win in Iraq is just plain wrong, and he's comparing the war to Vietnam. Is that a fair comparison, and what do you think about his comments?

THE PRESIDENT: I know we're going to win, and our troops need to hear, not only are they supportive, but that we have got a strategy that will win. Oh, there's pessimists, you know, and politicians who try to score points. But our strategy is one that is -- will lead us to victory. The only thing that the enemy has got going for them is the capacity to take innocent life and to get on our TV screens with this devastation that they cause. These people cannot stand free societies. They have no regard for the human condition. They'll kill women and children at the drop of a hat, all aimed at frightening the American people and trying to get us to withdraw. And if we were to withdraw, the likes of Zarqawi, who is a sworn ally of bin Laden, would have a safe haven from which to plot and plan. 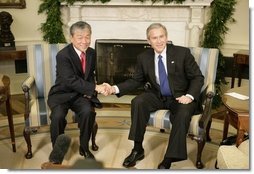 The lessons of September the 11th are lessons this country must never forget. We've got to take each threat seriously; we've got to stay on the offense. In the long run, a democracy will help eradicate the conditions that allow these people to find any kind of support.

And so our strategy is two-fold. On the one-hand, we'll stay on the offense, we'll train Iraqi soldiers so they can take the fight to the enemy. And on the other hand, we'll continue to work with the Iraqi people to spread democracy.

And the American people must take notice of the fact that the people of Iraq are showing incredible courage in the face of this violence. After all, there was an election last January to put a transitional national government in place, then they voted on a constitution. And in a short period of time, they're going to be voting for a new government. They vote by the millions, which stands in stark contrast to the society in which they lived under the tyrant, Saddam Hussein, who, by the way, is now on trial, as he should be on trial.

I think his trial is indicative of the change that has taken place in the Iraqi society. In the old days, if Saddam and his cronies didn't like you, you didn't get a trail. You were just put to death or tortured. Today, there is a system, a judicial system in place that will give Saddam Hussein a chance to make his case in court, as well as giving those who have been tortured by Saddam Hussein a chance to step forth and provide witness to the brutality of this man.

Q Thank you, Mr. President. Does your administration have any plans to change the policy of renditioning and/or the detention centers alleged to be taking place in Europe?

PRESIDENT BUSH: Carl, first of all, I don't talk about secret programs, covert programs, covert activities. Part of a successful war on terror is for the United States of America to be able to conduct operations, all aimed to protect the American people, covertly.

However, I can tell you two things: one, that we abide by the law of the United States; we do not torture. And two, we will try to do everything we can to protect us within the law. We're facing an enemy that would like to hit America again, and the American people expect us to, within our laws, do everything we can to protect them. And that's exactly what the United States is doing. We do not render to countries that torture. That has been our policy, and that policy will remain the same.