For Immediate Release
Office of the First Lady
November 30, 2005

MRS. BUSH: Well, I'm here today, really, because the Corporation for National and Community Service is about to announce the results of a survey that they did that shows that 55 percent of young people between the ages of 12 and 18 are now volunteering in the United States. And I think that's such terrific news. It's really good news about this generation and about their responsibility that they feel to their country and to the other people that live in their country -- elderly people, children. And I think that's really, really good news. 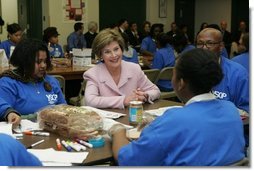 So I think it's really, really good news, and I'm very, very proud. I'm proud of this generation. I knew anecdotally that they were volunteering everywhere because I see young people volunteering wherever I go, but now this confirms it with the results of these studies. And I want to encourage adults, those who are over 18 who aren't in this group of volunteers to be sure that they volunteer, and not only reach out, especially during this season that we're coming up to, the holiday season, but they also teach their children how important it is to volunteer and to help people, and what a great feeling you get when you're the one that helps people.

I don't know if you could hear their stories, but they cleaned up an apartment for someone who was going to be evicted. She had a notice of eviction because her apartment was so messy and she was really not able to take care of it herself. So one part of these young people went to her apartment and cleaned it for her. Another group went to an apartment house and cleaned there. The boys cleaned out in the parking lot and the garage; the girls cleaned inside. One group went to Martha's Table and worked with the children who are in day care there. Another group went to another day care center and worked with the children who were there. 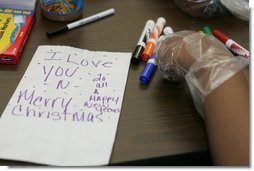 So I'm really happy to be here on this very, very happy announcement about how many young people are volunteering. Thanks, you all.